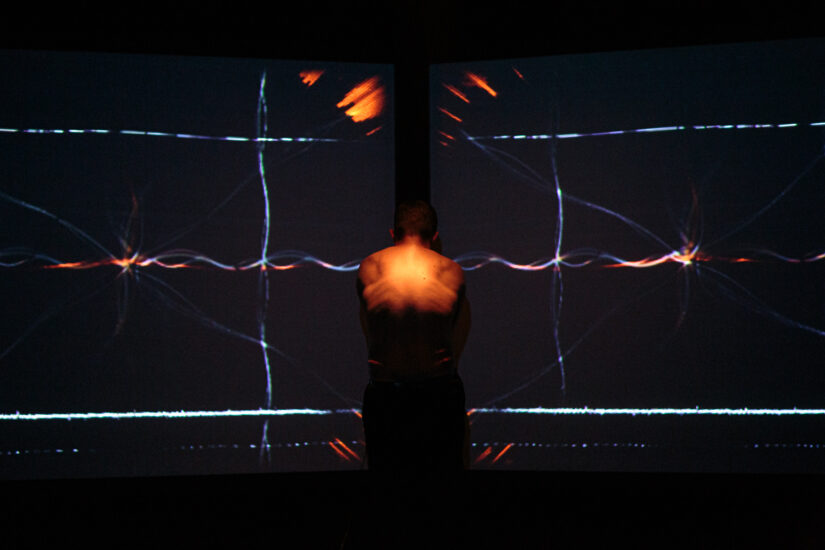 19.00 Račka Gallery
Opening of the international group exhibition The Radical Reverberations of the Body

18.00 Račka Gallery
Guided tour of the international group exhibition of The Radical Reverberations of Bodies festival

Kikimore will perform the composition Koit at the Račka Festival, which means “dawn” in Estonian. The composition will also include segments from Kikimore’s upcoming debut album, which will be released in November by the Slovenian record label Kamizdat (publisher for the development of Slovenian electronic and experimental music).

The group of creators are known for using mostly analogue musical instruments of their own making (DIY and DIWO). The creation process is based predominantly on experimenting and improvising with the sounds from different instruments such as drone, synth, theremin, joined by the sounds of nature. They participate at many Slovenian festivals and in intermedia gallery projects.

KIKIMORE (SI) are an experimental noise group formed as a part of the ČIPke Initiative, Rampa Lab, Ljubljana. This group of female artists mostly uses DIY and DIWO analogue musical instruments. They are featured at many Slovenian festivals and intermedia gallery projects. To date, they have performed at Galerija Kapelca (using their first autonomous bionic instrument created by bioengineering the artist’s cells – CellF), Festival MENT, and +MSUM in Ljubljana, following an invitation after being recognized as a case of good practice emerging from the ČIPke Initiative, as a part of the exhibition Sustainable Cities: Pavilions, Manifests, and Crypts.

ICTUSCORDIS ‘“modulatio’’ is an intermedia performance, audio-visual laboratory whose main subject is the heart of the artist.

The project explores the interactions between art and psychology, between physical and mental organisms. Januš Aleš Luznar uses the Biofeedback method as an artistic inspiration, manipulating the arousal, intensity, and tempo of his heart through various mixing techniques and sounds. No looping or sampling is used for the performance. He uses a custom-made interface – an analog circuit preamplifier, with an electronically adapted stethoscope – and manipulates the sound of his heart in real time by means of various mixing techniques and sound processing modules and effects. The sound produced is also interpreted in digital form, wherein the sound spectrum and velocity are split. The digital signal then triggers changes in the visualizations, which result in a series of abstract rhythmical visualizations.

The artist invites the audience into his consecrated space of artistic and spiritual intimacy and urges visitors to be transported by the sounds and visualizations of his heartbeat. The performance aims to awaken an awareness through listening and observation. To find oneself in the heartbeat of the other is to recognize the connection between all that exists.

JANUŠ ALEŠ LUZNAR (SI) is an intermedia artist, producer, performer, DJ and electronic music artist. He completed the High School of Media and Graphics in Ljubljana and continued to research and experiment with sound, music production, and creation of electronic music. From 2003 to 2007, he took part in several international seminars on media art, and held workshops on electronic music and DJ-ing. Between 2007 and 2008, he joined Centre 21 (Hupa Brajdič Produkcija) where he takes part in creation of performances (Minljivka, Čarovniški bluz, Invisible Theatre – 24-hour show, Na palubi etc.). This year, he created a new music album: Yanoosh – When the earth stood still. His main independent intermedia project includes research of the human heart as a tool for intimate artistic expression (performance Ictus Cordis “modulatio”, 2018, and performance Ictus Cordis “dialogue”, 2019).

siXren (Verbum Magicae) is a piece with two different materialisations. It is a music performance that will be premiered at MGLC Švicarija and an ambient installation with an experimental video.

The siXren (Verbum Magicae) project is inspired by the models of ancient healing rhetorics. The work explores the psychoacoustic effects of ancient verbal and sound formulas used in healing ceremonies, while it abstracts and reapplies them into the matrix of contemporary sounds. Between digital and animate, pre-modern and hyper-modern, we enter the liminal space between the Earth’s rhythm and aesthetics of experimental noise music. Our techno-ecology has lost touch with the Earth’s rhythm and is permeated with sonic disturbances. Ancient linguistic/sound patterns were considered as healing transformative agents and as the missing link between man and nature. Practices such as ancient Greek rhetoric, word magic, ritual poetry, as well as contemporary cognitive science and wellbeing methods, utilise the primordial power of utterance, rhythm and sound to affect our animal senses and consequently our body biology, brain chemistry, sensory and cognitive clarity. The ancient knowledge of verbal formulae serves to establish a new relationship with nature in the coming era of posthumanity and informs the current sonic imaginary with poetic and healing sensibility.

siXren (Verbum Magicae) is made in collaboration with beepblip (sound) and Brina Vidic (visual and costume design).

AGNES MOMIRSKI (SI) is a multimedia artist who completed her BA in Fine Arts at the Willem de Kooning Academy in Rotterdam, the Netherlands, and her MA in sculpture at the Royal College of Art in London, UK. In her work, she addresses the relationship between the human body and technology while using different artistic means such as performance, music/sound, installation, photography and film. Together with her close collaborator Georgia Kareola, she is the founder of the Specter Platform. She lives and works in Rotterdam and in Ljubljana.

French artist Yves Klein (1928–1962) created the Anthropometry series of paintings by using naked female bodies coated with paint as living brushes. In the Technometries performance, Iza Pavlina will replace the brush with an interactive sexual aid, which will be loaded with colour and guided across the paper by the artist, including the creativity of the audience into the activity.

IZA PAVLINA (SI) finished postgraduate studies in painting at the Academy of Fine Arts and Design in Ljubljana; in 2015, she received a Special Achievements Award there. Her work is shaped by her interest in topics related to sexuality, paraphilias and pornography. Creating fictitious identities, she enters the virtual space to explore various phenomena of social anomalies, relations of power, and the question of how to manipulate one’s own image to establish communication with a target group of internet users. She works in the media of drawing, video, photography, installation, and performance.

Layer upon layer
A painting is painted,
Until it looks like nothing
But the image.
Beautiful?
Beautiful as the most beautiful of them all.

SIMONA SEMENIČ (SI) is an artist who graduated at the Academy of Radio, Film and Television in Ljubljana, majoring in dramaturgy. In addition to writing and directing, she also performs in autobiographic performances. She has directed two performances: an32adaptation Večna medikacija (City of Women, 2006) and Hura, Nosferatu (+2015). As a co-author with Nada Žgank, she has also appeared in the field of visual arts: Zapis celote (2018) and Janezove sanjarije (2020). She has received numerous awards and accolades for her work, including the Prešeren Fund Award, three Grum Awards, and the Modra Ptica Award. Her stage texts have been translated to 19 languages. With her performances, she appears at many Slovenian and international festivals.