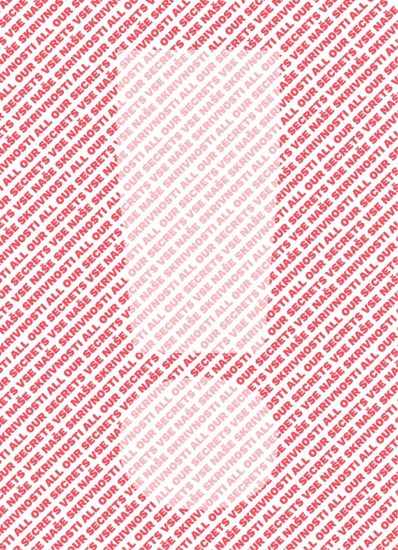 Why is it that secrets, and in particular the public performance of secrets, are playing such an important role today for individuals and societies alike? On the one hand, we seem to be driven by a growing desire to exhibit our lives on- and offline, sharing everything from shopping secrets to intimate glimpses of our private selves. On the other hand, our anxieties increase as we become aware of the sheer mass of personal data that is secretly harvested, stored and used on a large scale by states and corporations for purposes we do not know (and often consciously ignore), an insight fuelled by the major and minor information leaks of recent years, making sensitive data widely accessible and throwing global power relations out of balance. This paradoxical situation can also be described in more economic terms: as secrets become more and more difficult to keep, they turn into a scarce commodity whose value we systematically deflate by advertising everything we want people to desire and consume in one way or another, from remote holiday resorts to our own life stories, as “secret/s”.

Secrets do not simply exist as fixed entities, but rather in and through communication. They are never just the classified document or the personal experience you don’t want anyone to know about. They consist in the communicative acts of selectively sharing information with others, of limiting or granting access to it. And they are communicated as stories. What provokes the outcry around data leaks or the public revelation of private secrets is the stories they trigger or bring to light. Sharing a secret means telling a story – and secrets you don’t share are stories that you tell yourself instead (and that your body will blunder out sooner or later).

Thus, secrets function as a mechanism for creating and structuring relations between individuals and groups, between those who are included in or excluded from certain information. They come into being with the other in mind, organising how we are, or are not, together. Secret codes, sites or rituals have always been used as media that creates and communicates difference within and between communities. Thus, looking at the dynamics of keeping or sharing secrets today sheds light on the ways in which our social, economic and political landscapes are created and maintained, or destabilised and reconfigured. All Our Secrets looks at the performativity of secrets, at how we narrate (= make) our past, present and future by the way we deal with and in our secrets, how we make them travel in time and space.

In The Haul (Hello Everybody), Stefan Panhans reflects on the contemporary desire to publicly share “secrets”, producing a self that is simultaneously autistic and eccentric, a mere entry point for commodities into a private sphere one no longer just inhabits, but exhibits. Staš Kleindienst‘s series of paintings present landscapes of connectivity and control, both real and phantasmatic. They are the stages on which state and corporate interests are channelled into and played out as collective desires. Bureau of Inverse Technology‘s bit plane presents strategies for playfully undermining the physical barriers and techno infrastructures that organise and protect these landscapes.

In What Happens in Halifax Stays in Halifax (in 36 Slides), Mario García Torres researches the afterlife of a secret artwork initiated by Robert Barry in the 1960s. How, and how long, can it exist if its story is never passed on and thus remembered? Apparatus 22‘s Repository & Love series reflects on the unseen displays of museums and collections: the vault as the exhibition’s other where the desire to see and to show still articulates itself. In Free Mail, Martin Kohout uses his smartphone to infiltrate an institutionalised space of privacy incidentally creating speculative profiles of its users. Lenka Đorojević and Matej Stupica present The Horizon, the modified version of a familiar architectural element that organises the exchange of information and values, and relies on a screen of secrecy to communicate power and social exclusions.

Susanne Kriemann’s series of radioautographies of rocks, RAY, traces the hidden, toxic heritage of today’s post-industrial landscapes and question our sense of what can be seen. In I / Object, Kallabris uses sounds from hidden analogue sources that conspire to create a relational field of sound events. Felipe Mujica‘s print series There Is Light in Every Window (#6) draws on the visual language of 20th-century graphic design, re-reading its implied (techno-) utopianism against the background of our present and possible futures.