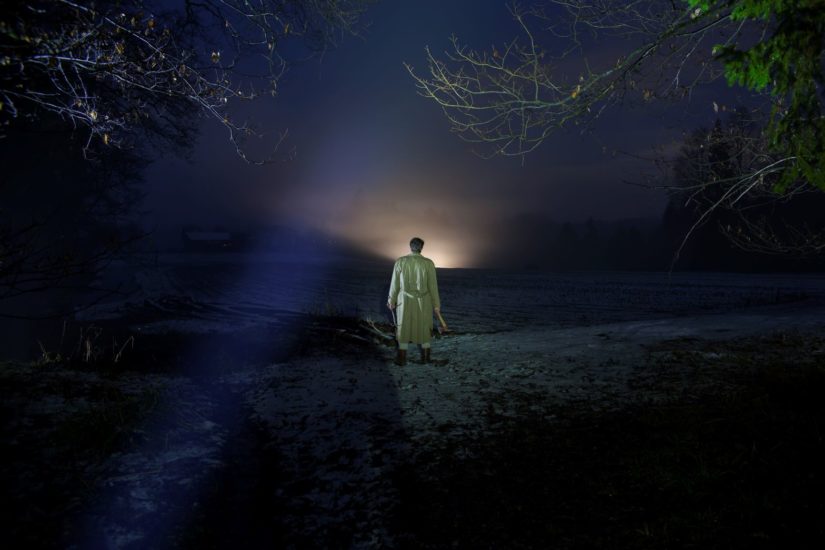 You are invited to the opening of the exhibition on Friday, 21 December, at 7 pm, at Likovni salon.

The city will be enveloped by darkness any minute now, or it has been already. When the lights shine in the distance, the faces and the truths that we would not see in the dark if they were not lit by a beam of light are awakened, as if coming from “God knows where”. Perhaps the chase is over. The foreboding of evil hangs in the air. The man is not dead, he just fell asleep too quickly. He is dreaming of his fathers.

This is how the new series by Tomaž Črnej could address the viewer in a literal sense. It is one of the “Celje” works in the oeuvre of an artist attracted by the local subject matter as a well-known story, into which he is totally immersed and which he at the same time presents as a film scene brimming with suspense. Through the staged photographs produced in a lightbox, and a reminiscence of the work by American photographer Gregory Crewdson, the artist highlights excerpts of fantasy narrative at non-coincidental locations in Celje. These are historically, ecologically or socially marked areas of the city, which, as the only real elements in the photographs, symbolise either the field of human activity or the devastation and sins of history at the point of today. In the abandoned tree nursery, in the middle of an archaeological site, at the labelled Petriček playground, at the nearby stations of the cross, in the woods, and in the immediate vicinity of the zinc industrial plant, fragments of fantasy are mixed with reality. The more we learn about the individual locations, the more the image shifts us from a film-like feeling to the repercussions of the present-day, and the more we observe the figure within the entire set-up, the closer we feel to the story in the film, through which the scenes are being transformed into eloquent metaphors. The photographer uses a cinematic manner to create a sublime sense of foreboding, an illusion that becomes flesh through the considered way in which the image is directed. Like his American role model, Črnej uses mystical beams of light to create a tension between the influence of man and the power of nature, between the beautiful and the frightening, between the normal and the paranormal. The metaphor of the hunter father is not only borne by the magic light and isolated figures, but also by the backgrounds of the selected locations, where the artist sequences a series of darker sides of life in the city and on its outskirts. The metaphor of the father is therefore Celje itself, Črnej’s birthplace, where he lives and creates most of the time, where he is trapped into his own history, through which he critically reconsiders the city again and again. It is precisely here that he draws his ideas, which he – sometimes humorously, sometimes murkily, almost nihilistically – harnesses into his photographic images.
The exhibition presenting the photographic series, again similarly to the film genres, allows continuation and stretches into the public space, given that the artist also incorporates some of the photographs on several large billboards across the city of Celje. Črnej thinks of them as the bearers of the stories used by the contemporary marketing apparatus. The announcement for the exhibition in the advertising campaign that comes close to the aforementioned film narrative is in this spot redirected by the artist to a sense of vonTrieresque shock. At the point where a solution is supposed to be reached, a sense of tension and discomfort reigns. Because the unimaginable is mixed with the real-life dilemmas of a small town, the large-format boards even raise the attention of a random eyewitness. The photographer aesthetically represents something that is pushed deep and far, which can after all create legends and myths out of frustration. But the chase is not over. Not for an insight of the beautiful in the horrifying, nor for the truth in the scenographically arranged image.

Tomaž Črnej (1963) started in the medium of photography as a self-taught photographer and soon turned to a field that moves between narrative documentary and art photography. He attracted attention with the Slovenian Press Photo 2010 award-winning series Mistake, which he presented at the Plevnik – Kronkowska Gallery (Celje) and at the Center for Contemporary Art Celje, where his projects have also been included in group exhibitions several times. He has presented himself with the photographic series In the Gallery at the Photonic Moments Festival (Janez Boljka Gallery, Ljubljana) in 2016. His light installation Contributions to Slavic Mythology was included in the festivals Celje Fokus 2015 and Lighting Guerrilla 2016 (Ljubljana). He is interested in socially engaged and participatory projects (Kajuhova, Celje, 2011, 2012), and is active in the field of (documentary) video on contemporary dance. Črnej has exhibited in Slovenia, Italy and Austria. He has received national and international recognitions and awards for his photographic work.