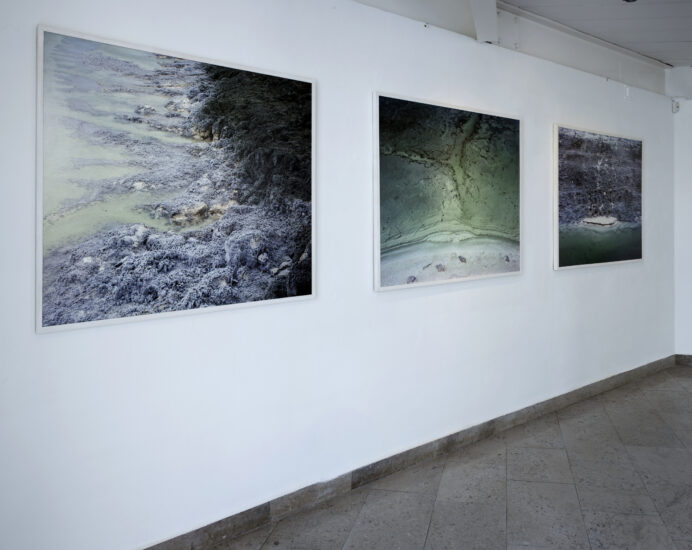 Bojan Mrđenović (1987) is a Zagreb-based artist. He works in photography, and recently also in video. He uses the photographic medium to record the social reality in the wider local context. To work in the local environment is the conscious decision of the author, since this direct and investigative relation to the place of residence affords him a more in-depth understanding of the broader geopolitical tendencies and their impact on societal structure. He is particularly interested in spaces of a social character, whose appearance indicates a place of passage and a process of transition. His photographic series trigger the collective memory, yet the artist does not address the socialist period through the prism of nostalgia. He takes on the position of an observer and spectator, drawing attention to the unceasing variability of the social classes and their direct involvement in experiencing life for both the individual and the community.

The series of photographs Adriatic Postcards (2013 – 2014) shows the crumbling hotel complexes along the Adriatic coast. The hotels, which were in the past intended for all the social classes, are now abandoned or in the process of waiting for foreign investors to transform them into luxurious leisure amenities largely unattainable to ordinary people. The series Budućnost (2011) highlights border houses, sometimes commercial buildings, today abandoned architectural formations, also in a state of an indefinite future. The ideology of community and unity is in the photographs replaced by a feeling of emptiness and a state of alienation.

The artist will present the piece Imported Desert for the first time at Likovni salon. This is a multi-faceted project, in which he explores the phenomenon of the degradation of local industries. He is interested in the economic, political, social and ecological effects, as well as the repercussions of this phenomenon on everyday life. Mrđenović highlights the tendency of combining local and global interests, which in most cases take place in an asymmetric relationship with social interests. He deals with this issue in the example of a local factory, a producer of fertilizer, which is currently undergoing the process of privatization. The first part of the project, which exposes the environmental dimension of the aforementioned problem, will be presented at Likovni salon. The photographs show unrecognizable landscapes. The close-ups of these aesthetic images of undefined surfaces function almost like reliefs and appear completely abstract. They are like images of unknown spaces, made up of various textures that layer, overlap or refract each other. These are images of the waste product dumping ground of a factory, within whose immediate vicinity extensive imaginary landscapes are piling up and forming, translated into poetic landscapes by the artist in his work.

Bojan Mrđenović(1987, Vitrovica) has completed his studies of art history and has graduated from the Department of Film and Television at the Academy of Dramatic Art in Zagreb. He is a member of the Croatian Association of Artists. Solo exhibitions include: Toplice (Spas),Galerija Lang, Samobor, Zagreb, 2014, Budućnost (The Future), Galerija PM, HDLU Zagreb, 2014, … He has taken part in several group exhibitions:Likvidacija (Liquidation), Galerija Miroslav Kraljević, Zagreb, 2014, Fotograf u javnom prostoru (The Photographer in the Public Space), Galerija Greta, Zagreb, 2014, Aftermath – Changing Cultural Landscape, National Museum of Slovenia, Ljubljana, 2012, …

The exhibition is the fruit of co-production with the Galerija Miroslav Kraljević in Zagreb.