IVA TRATNIK
Masks. The curtain is so dense, but the North Star can be seen
19. 5.—9. 7., Gallery of Contemporary Art 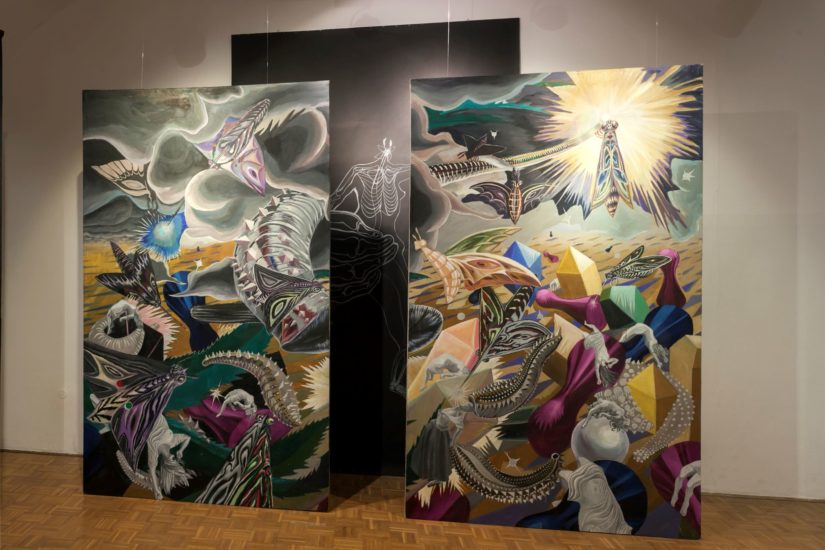 The painting of Iva Tratnik, brimming with visual sensation, saturated with unusual, mysterious details requires an attentive viewer, who knows how to listen to the multitude of visual details, surrender to the flow of associations offered, and put together the meanings implied. To such a viewer it will be revealed that in the present exhibition, behind the pure fantasticalness – behind the enigmatic images in which we encounter combinations of human and animal bodies, fragile hysterical women patients, figures that are getting at themselves in everlasting circles, x-rayed bodies whom we can see ‘under the skin’, leeches and moths, bugs that look like masks – that behind their appearance, there is a sensitive reflection of the real world, and that the images, which at first glance appear completely imaginary, are often the metaphors of contemporaneity. Imprinted in them, with sophisticated sharpness and wit, is the real world. This is where the spasms and entrapments of the fundamental social phantasms, ideals and constructs make their dwelling.

The journey through the exhibition, consisting of large-scale drawings and paintings, photographs, effects of stroboscopic light and, to conclude, a collective wall drawing, drawing done directly on the walls – a kind of collective improvisation – is a stroll through the individual cores around which individual pieces extend and connect. The images of the first segment, where we meet the lush body in dynamic movement, a kind of cross between an ideal baroque woman and a chicken, where modern barbiesquely ideal women’s legs spring up before us, hanging like pieces of flesh on hooks, where hybrids between a human and a pig are embodied (that are crossbreeds of Botticelli’s Venus and Michelangelo’s David) with lines drawn in like marked cuts of meat, reminiscent of the objectification of the female body, the construction of femininity and related beauty ideals, and then everything together of the ‘new renaissance’ of contemporary society, which is capable of creating a new kind of being, a human-animal hybrid, with all its scientific and technological achievements.

The big painting Blanche, don’t get upset that dominates the following segment and is named after Blanche Wittman, who was sectioned in a Paris hospital for mental patients with a diagnosis of hysteria, is inhabited by almost unnoticeable tiny women in paroxysmal positions of a hysterical attack. These hysterical bodies, floating in a fantastic landscape of dark clouds, magnified moths and giant leeches, together with the image of a headless God with multiplied commanding gestures, who looks like a puppet, and a colourful image of a moth/pelvis consisting of spread open and closed women’s bodies, unobtrusively, yet actively expose a society of hierarchies, patriarchal patterns and apparent authorities. How numerous are the interconnections and continual mental visual switch-overs that the artist demands from the viewer – hysteria that is nowadays more commonly known as neurosis and anxiety, was in the past linked with madness and bestiality, whereas the word itself is derived from the ancient Greek hystera (uterus). This is the strategy by which the artist creates the associative power of her images, offering a deciphering that is never shut off into unambiguous frameworks, and a reading that spreads beyond the boundaries of the image.
This is followed by paintings of imaginary tropical forests with numerous magnified bugs – they look like masks and warriors at the same time, placed in dialogue with a painting composed of surfaces of fabric and fake fur – we suddenly realize that we are facing a huge moth. The large dimensions of the paintings invite us to become immersed into the entire space, together with the stroboscopic light – which flashes pictures of people with painted faces in front of our eyes, sometimes barely noticeable among the tropical vegetation, as well as the feeling of almost physically experiencing the space and its images. The images, full of ritual elements, masks, mimicry imitating animals as if they were telling us about everyday life, about hiding or freedom behind the mask, the constant search for security, the importance of such elusive safety. The artist, as if she were offering us safety in the last ‘group’ segment, the collective drawing, which is, as she puts it, “an improvisation, but at the same time collaboration as the bright light of our times, a way of socializing and coexisting, which gives you new ideas or refreshes your own, which brings you and opens up new worlds yet to be experienced.”
Iva talks about the real through the fantastical. When she encounters a fact, condition or event, object or form that attracts her in the outside world, she responds with attention and artistic accomplishment. With the dynamic exhibition, full of corporeality and details, which are rarely random, through a dream fairytale disguise of metaphorical and symbolic content, figures and signs, she addresses the topical – in a manner that is tranquil, yet keeps up the tension. (Irena Čerčnik)

Iva Tratnik (1980, Celje) gained her master’s degree at the Academy of Fine Arts and Design in Ljubljana. She expresses herself though a variety of media, most often through painting, drawing, photography, installation and performance. She works independently as well as in temporary collectives.