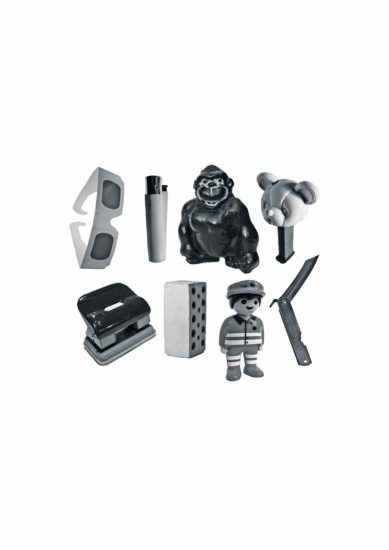 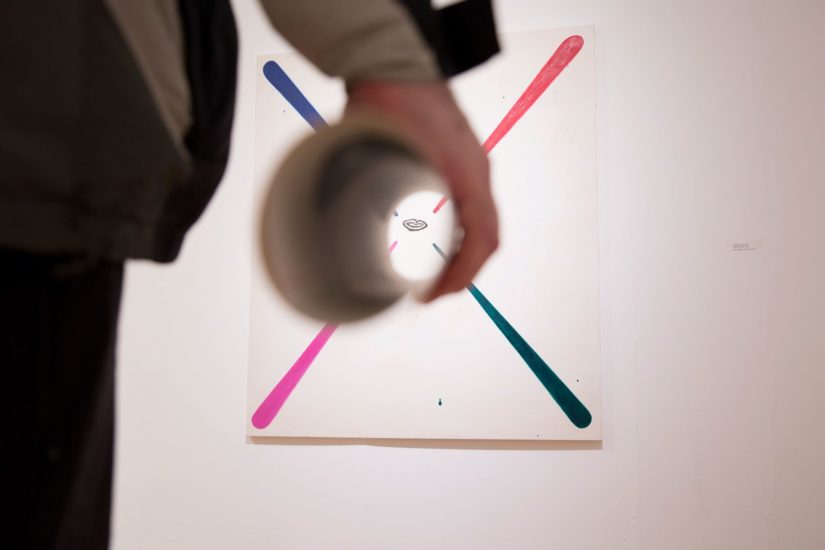 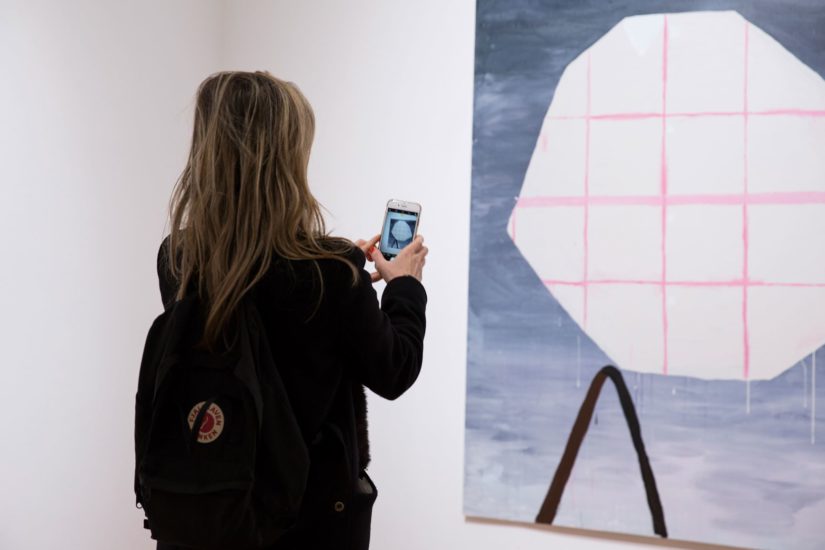 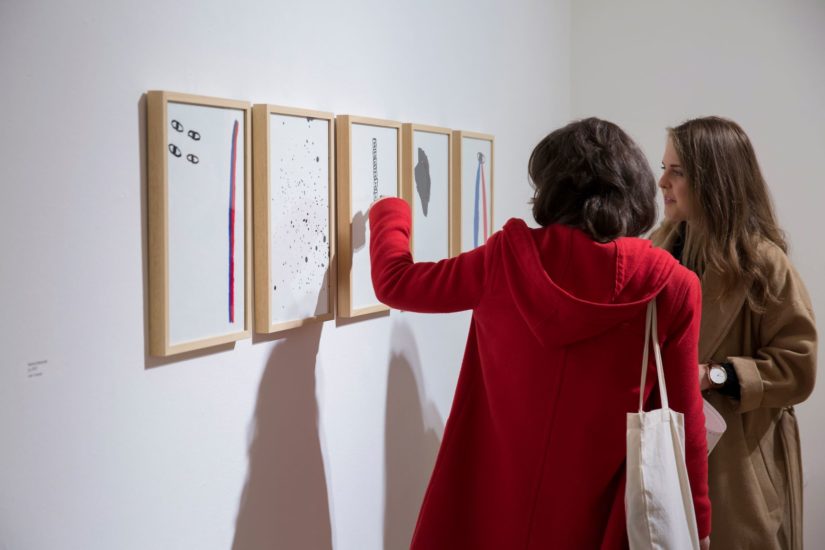 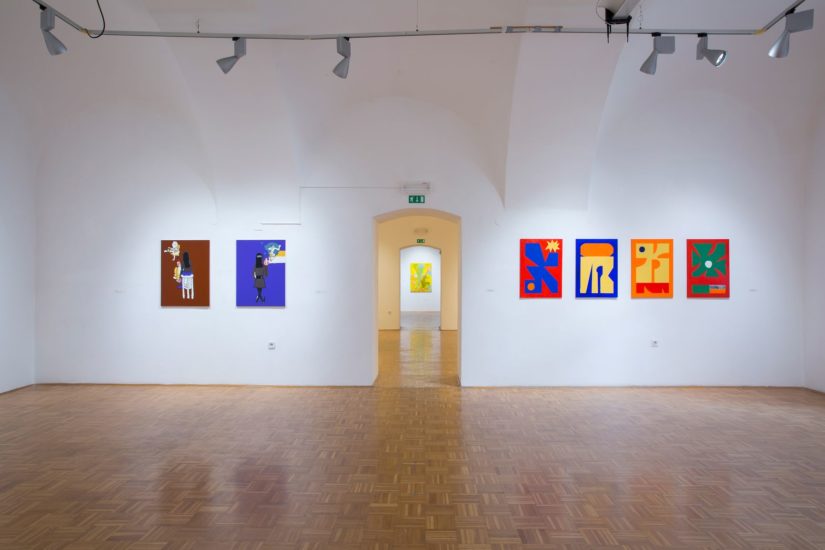 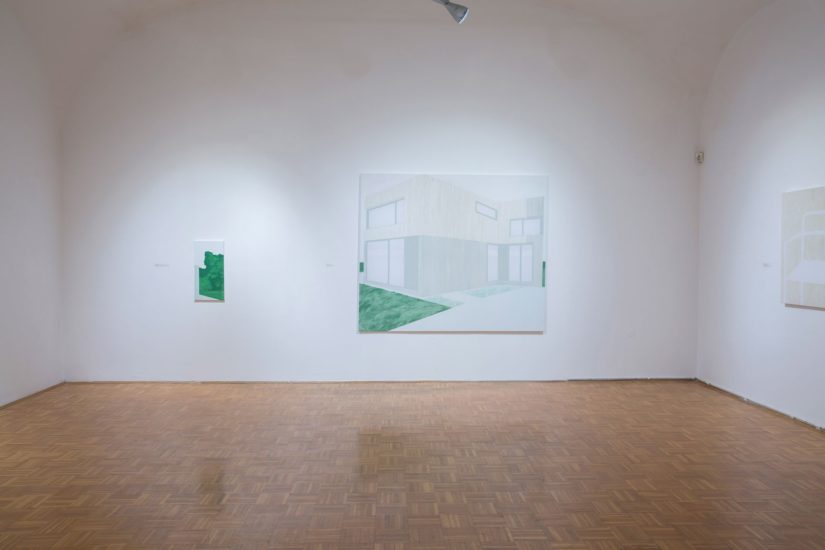 Osm / Eyt is an exhibition by eight artists, four women and four men, which is neither a coincidence nor a precise curatorial constellation. It is an initiative by a group that has no formal status and does not have a commonly defined artistic tendency. It cannot be labelled by generation or a narrowed spectrum of medium. More than study at the Ljubljana Academy of Fine Arts, it is interlinked by similar non-formal interests, a concern for less conventional modes of artistic engagement and parallel artistic environments that are not tied to one medium only. Nevertheless, the eight artists are united by the fact that two-dimensional art techniques are used most faithfully in their practice. At some point the group found itself under the auspices of the newly established art spaces in Ljubljana, such as Dobra Vaga and the Ravnikar Gallery Space, the artists have presented themselves in several variations at exhibitions in Izola, Ljubljana’s Škuc Gallery, Alkatraz and MGLC, and they have also outlined the programme of the House of Culture in Pivka in the recent period.
What we have before us, therefore, is chiefly a painting exhibition, from which a collective initiative arises through the interest of the collected artists for the medium of painting, printmaking, drawing and activities in the field of zine production. It rouses the views on the production of the creators that combines several areas of contemporary artistic creation and attempts to create communication between their visual interests, to seek the common points of encounter and divergence. There is a waft of the alternative in places, the all too known resistance against the safe build-up of the painting and classic aesthetic certainty, it slips into the language of sign and colour, the search for meanings at several levels of sign-making, including the humorous conceptual approach, toying between materiality and the quest for innovative graphic formulae. Alongside the more recent painterly production of larger canvases, also smaller drawings appear that express the instantaneousness of the artistic expression, the diary note-like strokes of the artist’s personality, narrative everyday life, or a critical outline of the contemporary moment.

Leon Zuodar and Miha Perne are not working as part of the Beli sladoled duo this time. The first artist imaginatively involves the concept of language and meaning in painting and drawing forms. He places the principle of the rebus and graffiti in the forefront through the crude treatment of the figure or notation. The painting or assemblage becomes a witty statement. The second artist uses a precisely produced, almost fairy tale-like figurative form or abstraction in the painting, capturing visual senses through a thoughtful selection of colours, layouts and shapes. At the same time, he expresses personal humorous comments through drawing, where the playfulness of the figure and colour elements prevails. Nez Pez, the only sculptor in the group, occasional tattoo artist and researcher of various reproductive forms of expression, is also presenting her recent paintings in the exhibition, in which, as with her sculpture projects, she combines the principles of digital and hand treatment of materials taken from her own production or the production known to the masses. Nevena Aleksovski continues with the essence of a centralised drawing in terms of form and meaning, which passes from the painting onto the wall or vice versa. The gesture of the figure and the change of background, as well as the support of the drawing, is at the forefront. Ivana Bajec builds up the outlined figure or composition by combining materials on the canvas at the same time (mixed media, collage). The gestures change into a form that is repeatedly outlined or filled with colour by the artist. Simon Kocjančič leaves an open space between abstraction and figuralism, meaning is settled with the primacy of shapes, supported by large colour surfaces. He builds up the composition of the painting through associations of the forms of things that evade unambiguous claims and act as an incomplete presentiment of the image. Zoran Pungerčar, who is very active in the field of graphic design, also uses large surfaces of colour in his paintings, captured into the contours of large signs, meaningfully balanced and semantically open. Nina Čelhar’s painting is formally the quietest painting, captured into a safer shelter of meanings, with a limited colour scale of bright undertones and green contrasts. Precisely this reduced colour scheme, despite the presentiment of urban landscape motifs, places the painting at an abstract level.
The artists in the exhibition are also united by the set-up and the co-curating of the smaller, more intimate works, through which they search for a common language, open to surprises and perhaps less common strategies of artistic activity.
Most of the participants are presenting themselves in Celje for the first time. The initiative sprung precisely from the desire for a presentation outside the capital and outside the preordained selections of repetitive, predominantly graphic, zine and multimedia, group shows. As the number and productivity of the young Slovenian painters demonstrates in the meticulously prepared exhibition of contemporary Slovenian painting Time Without Innocence at the Museum of Modern Art, and as Tomislav Vignjević already concluded in 2016 with the Better Doggy Style Than no Style exhibition at the City Art Gallery of Ljubljana, the interest in the painting medium is returning into a diversified field within Slovenian contemporary art. Through the independent presentations of the medium, several directions are being indicated, which painting has been following over the last decade despite its heterogeneity. On the one hand, these images are motivated and technically based on the very topical visual stimuli of popular and media culture (photography, internet) and the effects of information technology in general, while they, on the other hand, still remain a visual legacy of late modernist painting. The works that are not coherently included in these exhibitions are perhaps unintentionally represented by the eight artists in the Celje presentation. The elements here are intertwined less narratively but freely, turning to drawing, abstraction, treatment of colour and material exploration of the painter’s canvas. The conception of forms persists on the border of well-known artistic legacy and contemporary semantic impulses. Crude drawing, images that resemble graffiti, printmaking and graphic design, illustration and the treatment of the pictorial field represent the challenge of connecting the various poetics in the exhibition with at least eight large-scale painting works, a series of smaller formats and an in situ intervention. Eight or eyt vibrates through the presentation that draws at least an eighth glance at the Slovenian artistic creativity of today.

Nevena Aleksovski (1984) graduated in Painting from the Academy of Arts in Novi Sad and obtained her MA in Cultural Studies from the Faculty of Social Sciences in Ljubljana. She is active in the fields of drawing, painting, illustration and art zines. She has shown her work in many solo and group exhibitions at home and abroad. She was the recipient of the main prize in 2016 for her art zine as part of the ZINE VITRINE dvatwozwei international call for submissions. She lives and works in Ljubljana.

Ivana Bajec (1990) graduated in Painting from the Academy of Fine Arts and Design in Ljubljana, where she also completed the postgraduate study programme in Painting. She is active in the fields of drawing, graphic art and painting. She has participated in numerous group and solo exhibitions in Slovenia, Croatia, Bosnia and Herzegovina and Romania. She lives and works in Ljubljana.

Nina Čelhar (1990) graduated in Painting from the Academy of Fine Arts and Design in Ljubljana, where she completed the postgraduate study programme. She furthered her knowledge at the Hochschule für Grafik und Buchkunst in Leipzig, Germany. In 2012, she received the ALUO Award for Outstanding Academic Achievements, and in 2015, the ESSL Collector’s Invitation special award. She has participated in numerous solo and group exhibitions in Slovenia, Germany, Austria, Greece, Italy and Finland. Her artworks are included in important public and private art collections. She lives and works in Ljubljana.

Neža Jurman – Nez Pez (1985) graduated in Sculpture from the Academy of Fine Arts and Design (ALUO) in Ljubljana, where she received the University Prešeren Award and the ALUO Award for Special Artistic Achievements. She works in printmaking, drawing, painting, sculpture, sound and video art. She has presented her works in several solo and group exhibitions in Slovenia, Italy, Germany, Bosnia and Herzegovina, Bulgaria and the Czech Republic. She lives and works in Ljubljana.

Simon Kocjančič (1979) studied Painting at the School of Drawing and Painting in Ljubljana. He works in the fields of painting, drawing, printmaking, photography and art zine production. He has exhibited in numerous group and solo shows both at home and abroad, including at the Alkatraz Gallery, the House of Culture in Pivka, Gallery P74, MGLC and the Neurotitan Gallery in Berlin. He lives and works in Truške near Koper.

Miha Perne (1978) graduated in Painting from the Academy of Fine Arts and Design in Ljubljana. In 2005, he founded the Beli sladoled painting group with Leon Zuodar, and in 2011, the Beli sladoled books & zines publisher. The twosome received the OHO Group Award (2011) for their work. Miha Perne works as an independent artist in the field of painting, printmaking and drawing. He lives and works in Ljubljana.

Zoran Pungerčar (1985) lives and works in Ljubljana. He works in the field of painting, illustration and graphic design. He received an award for the visual image of the Prišleki collection published by LUD Literatura at the Biennial of Slovene Visual Communications in 2017. Since 2011, he has been publishing art zines and artists’ books through his own publisher Look Back and Laugh, and has been actively exhibiting in solo and group shows. He lives and works in Ljubljana.

Leon Zuodar (1977) graduated in Painting from the Academy of Fine Arts and Design in Ljubljana. In 2005, he founded the Beli sladoled painting group with Miha Perne, and in 2011, the Beli sladoled books & zines publisher. The twosome received the OHO Group Award (2011) for their work. He works in the field of painting, drawing, printmaking and fanzines, and has been conducting graphic and fanzine activities at the House of Culture in Pivka since 2014. He has presented his works in many solo and group exhibitions in Slovenia, Switzerland, Germany, USA, Palestine, Bosnia and Herzegovina, Sweden and Croatia. He lives and works in Postojna and Pivka.