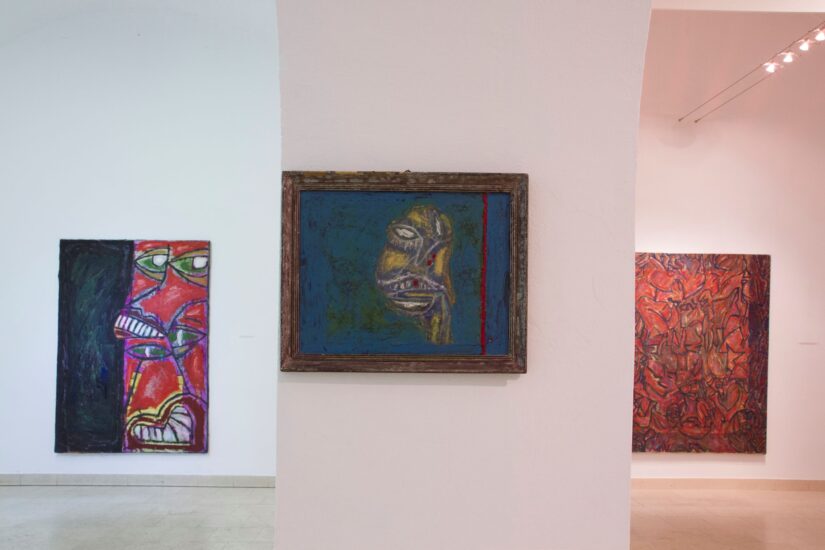 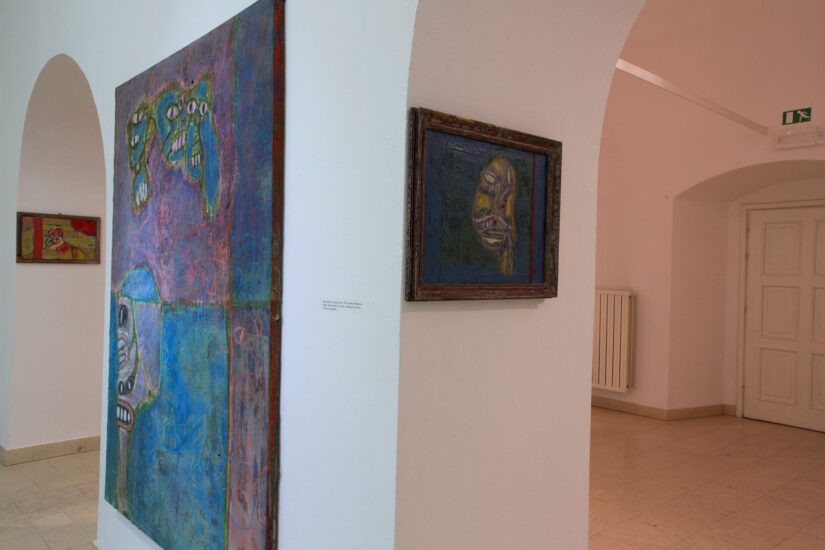 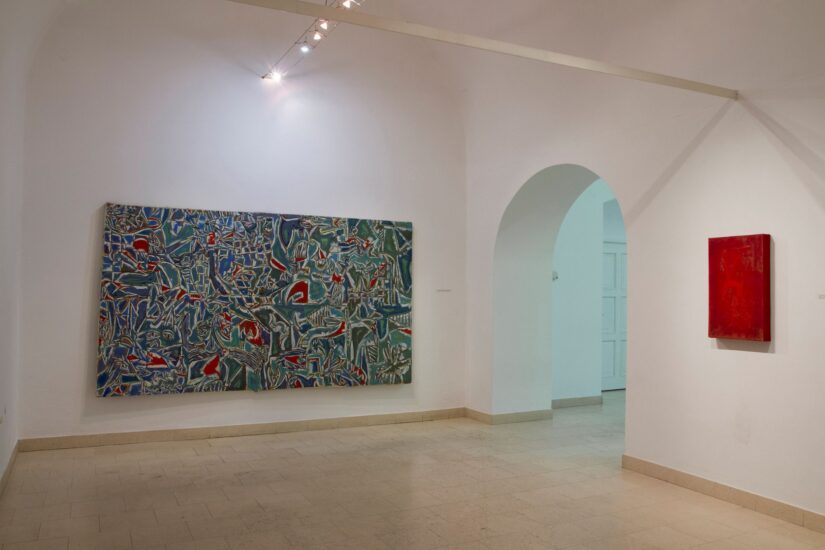 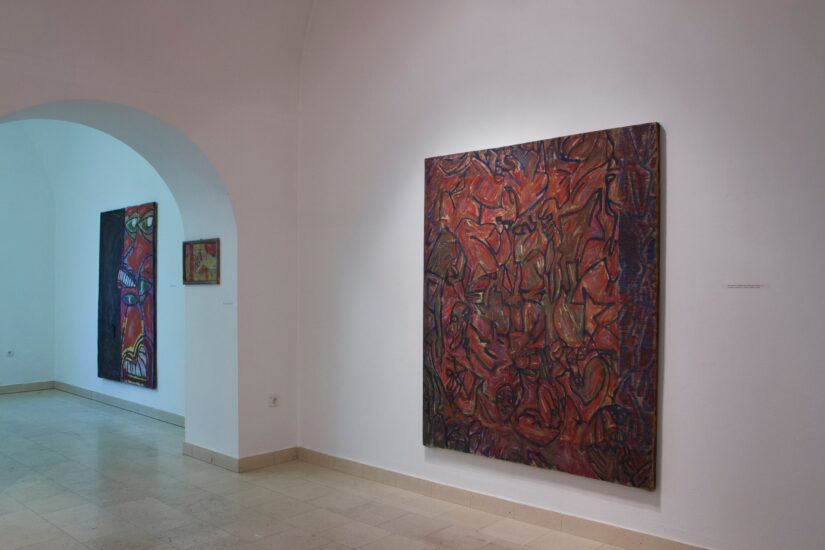 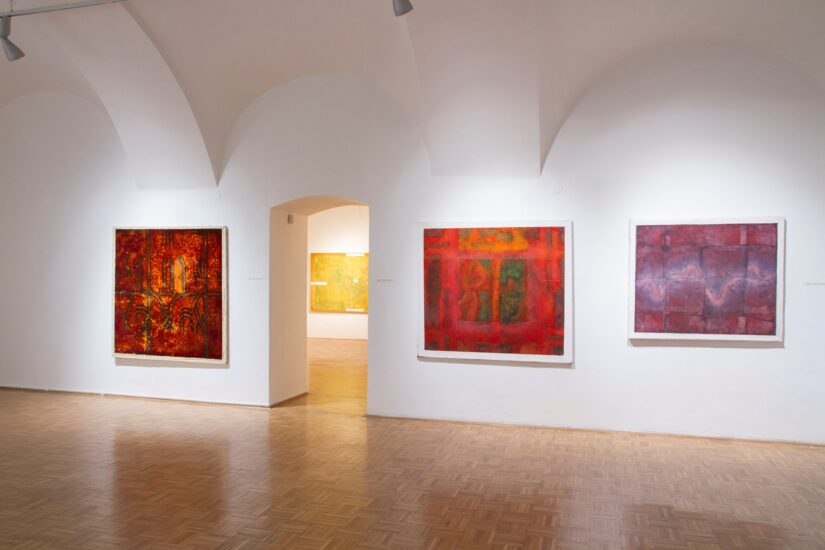 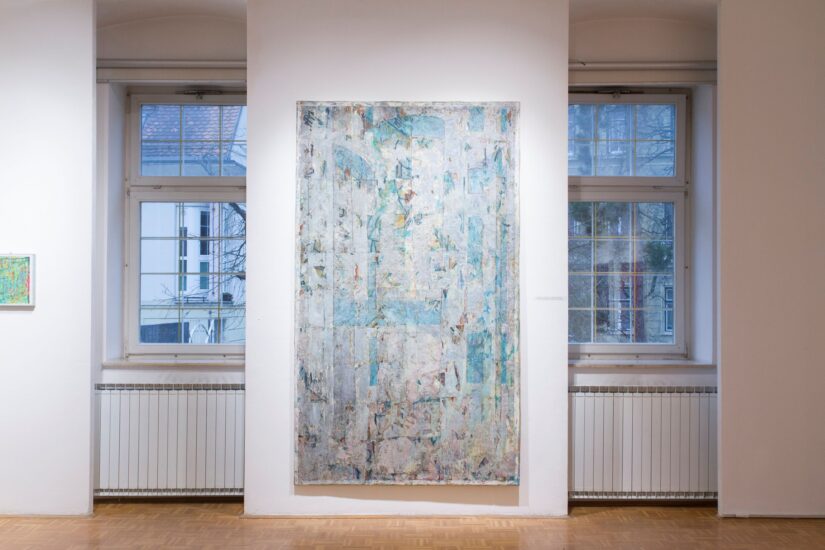 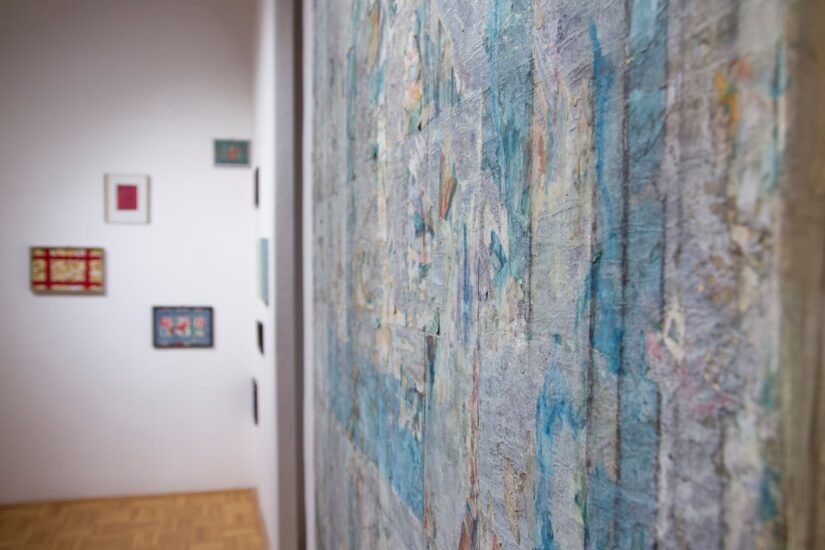 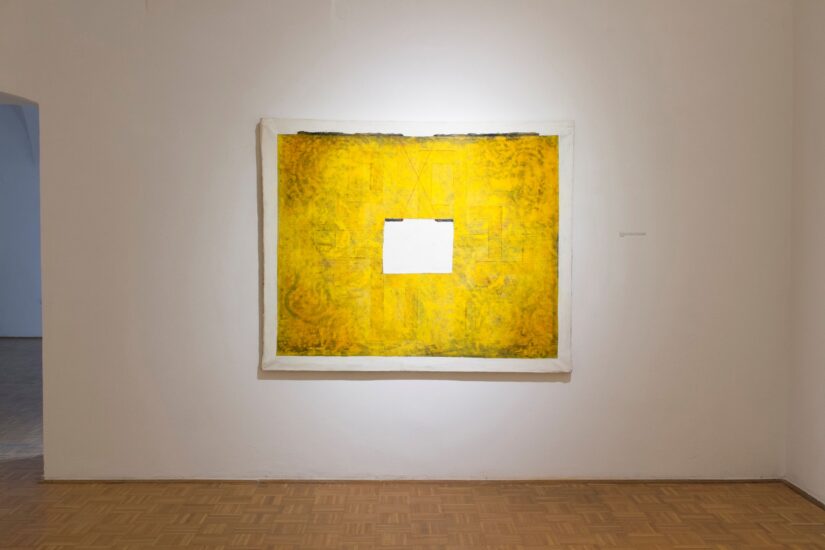 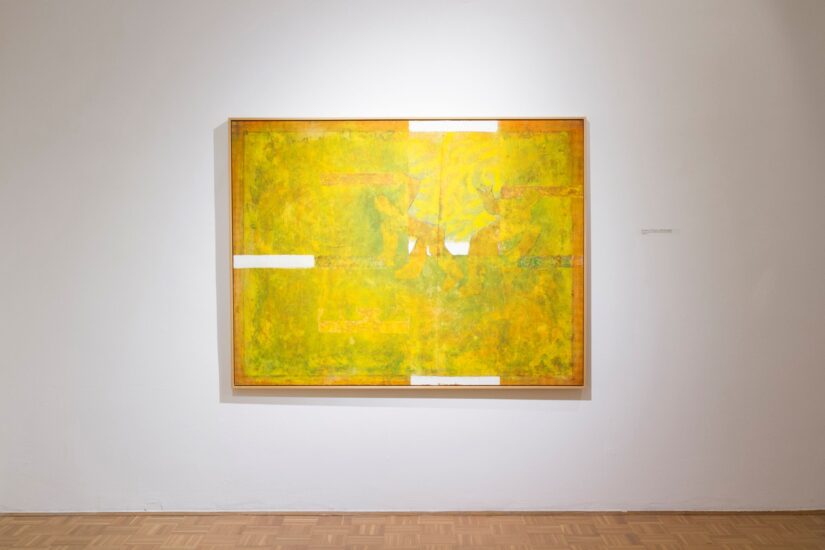 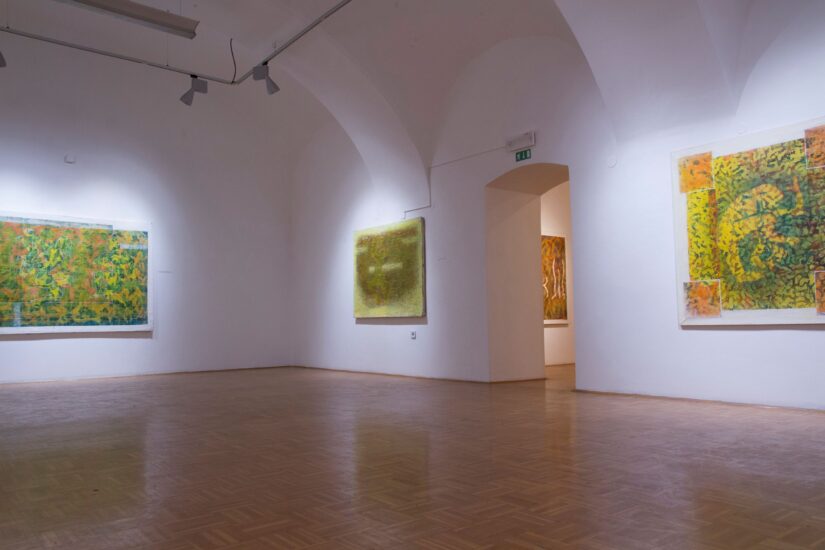 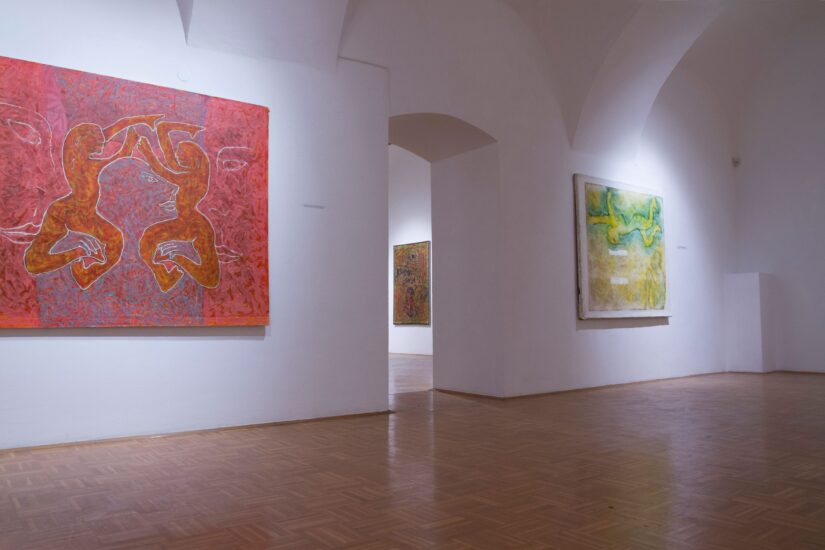 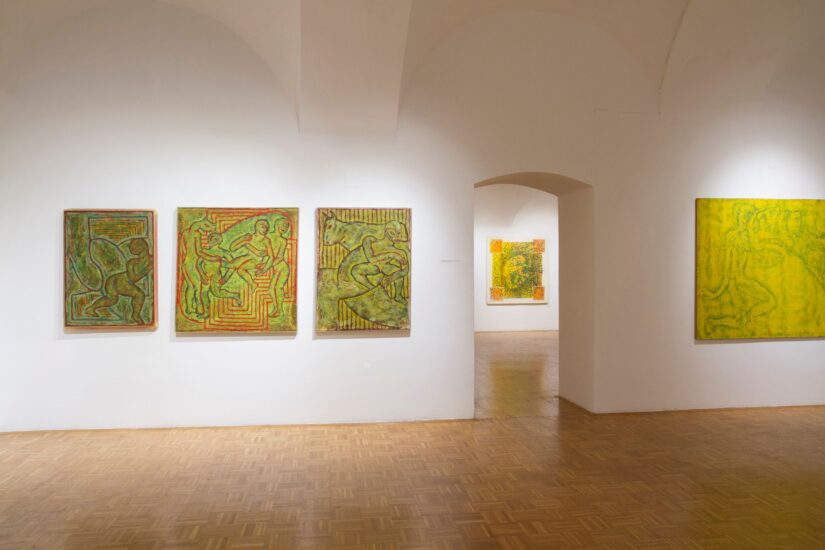 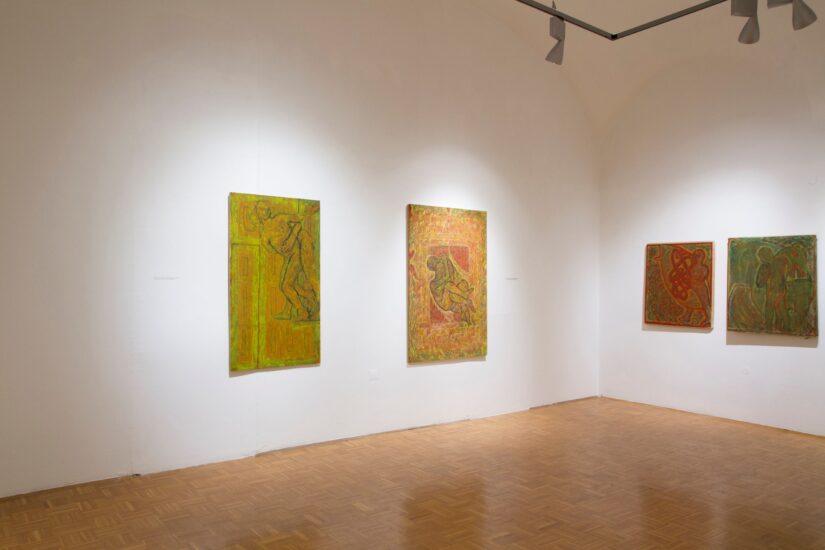 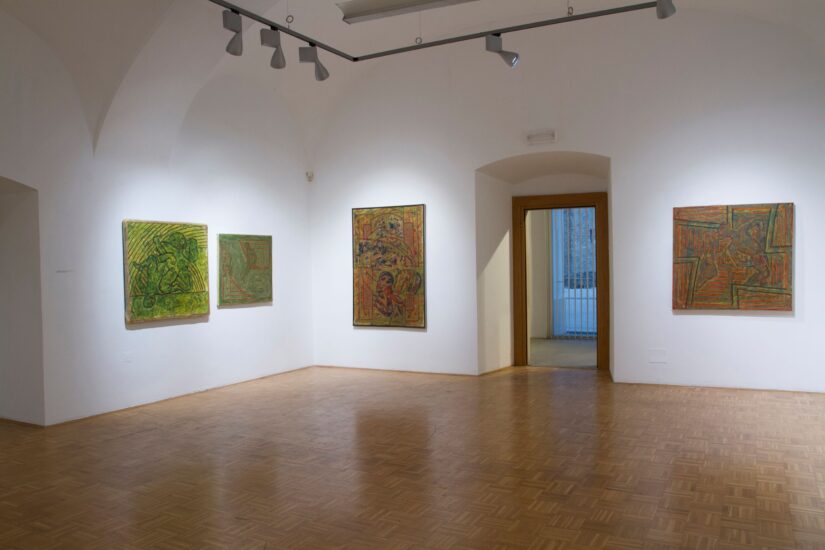 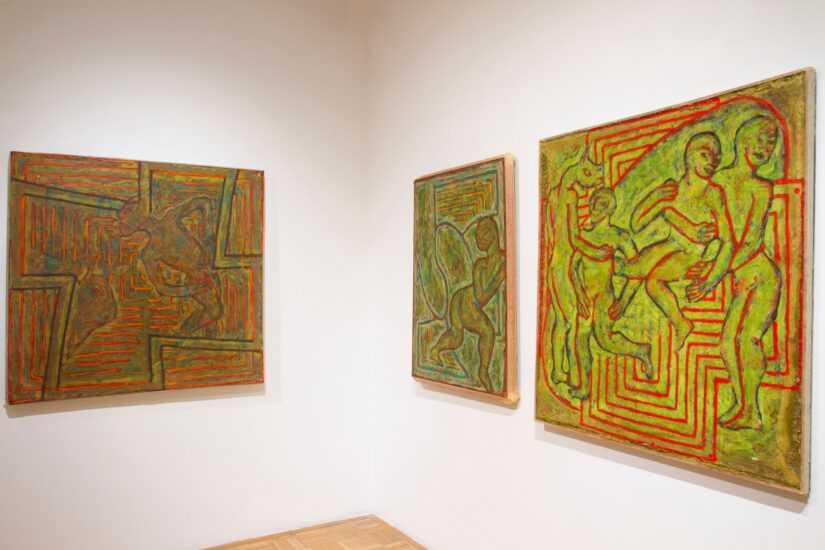 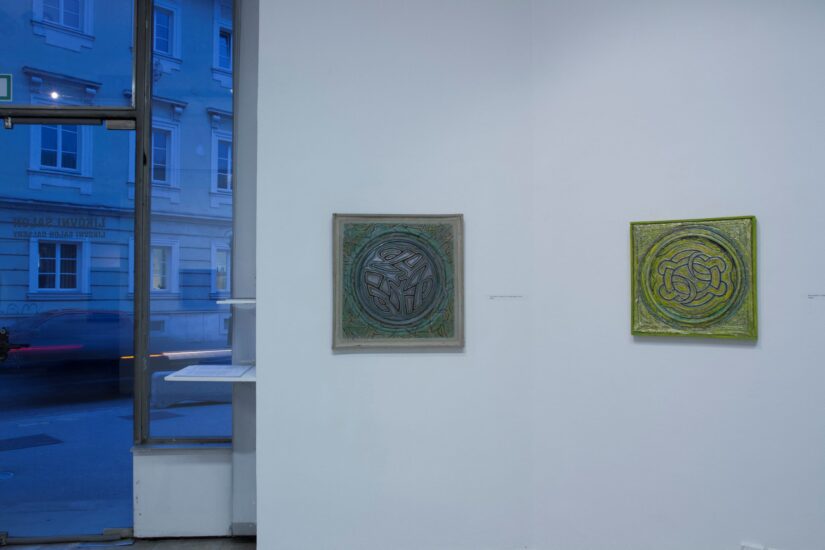 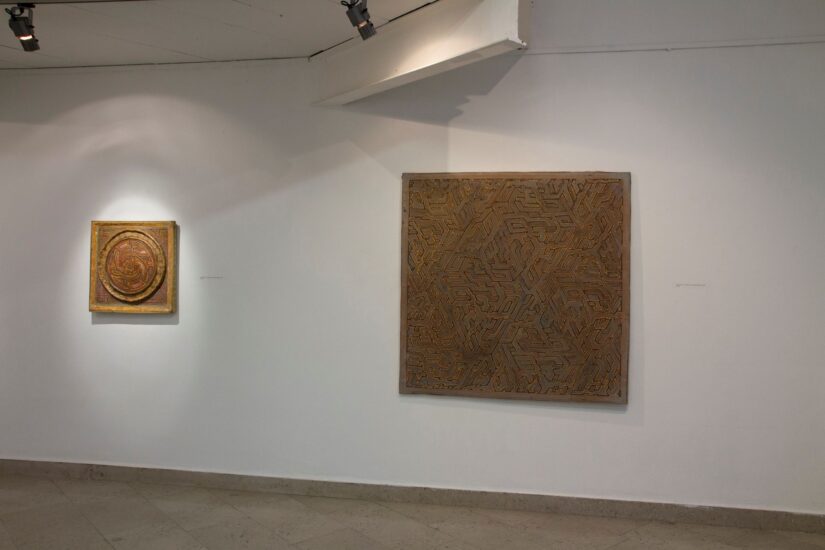 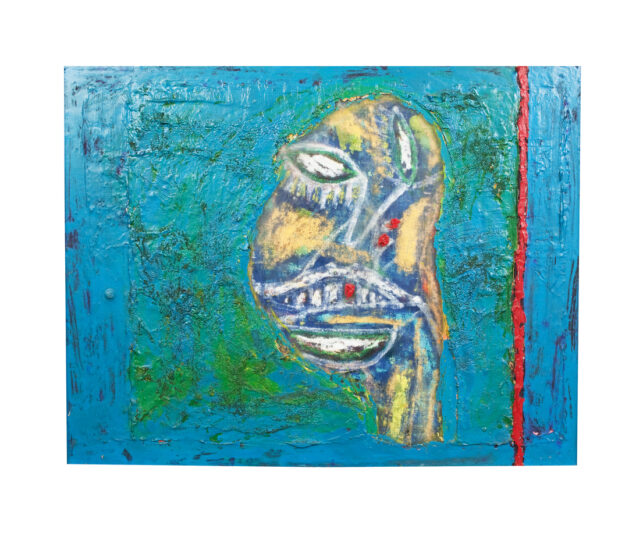 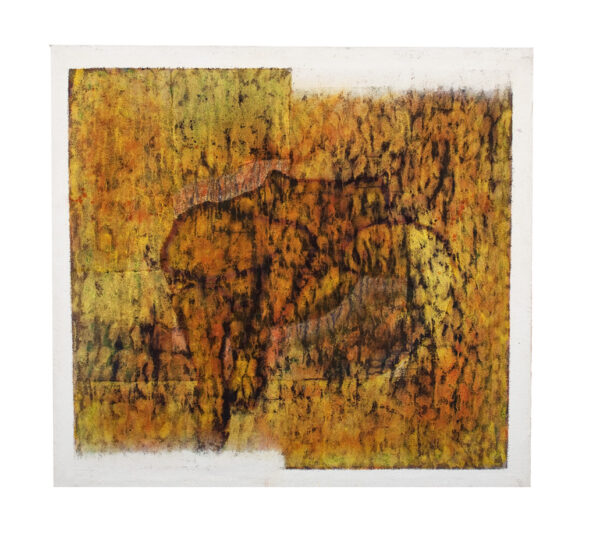 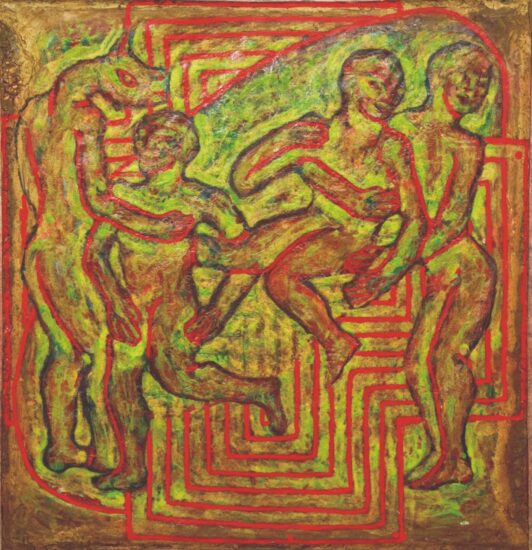 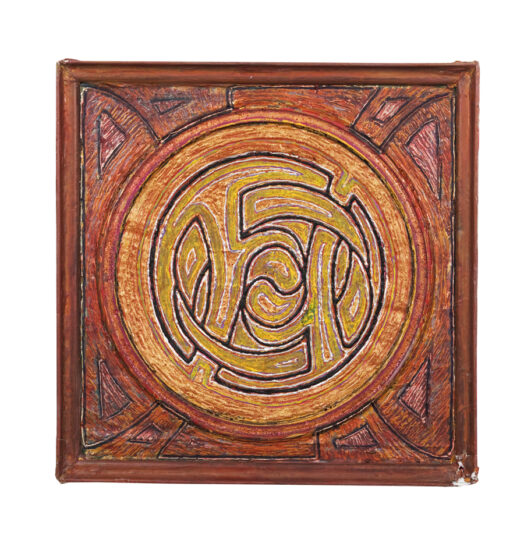 The retrospective exhibition of Celje painter Konrad Topolovec (1955, Celje – 2020, Celje) is an insight into the artist’s rich oeuvre, which has evolved over more than three decades of intensive creation, and which at the same time represents an opportunity to journey through his body of work that is otherwise predominantly located in galleries and particularly in private collections. Konrad Topolovec graduated from the Academy of Fine Arts in Ljubljana in 1983. He entered the Slovenian art scene in the mid-1980s with his colour-intensive figurative paintings in the style of the new image of the time, and went on to build his artistic path through an interchange of abstract and figurative periods, on a creativity that was very individual in terms of style and motif and did not conform to the current dominant directions, but remained anchored within distinctly personal, sensitive confines.

The 1980s represents a period of grotesque figures with an emphasis on colour in the work of Topolovec. The transition to and beginning of the 1990s is marked by a gradual concealment and withdrawal of the figure, the introduction of the collage method, bringing to light fragments, contours and signs that act as traces of the almost vanished figure, until the paintings in which the mimetic form is completely absent prevail at the end of the 1990s. This re-emerges with a great stride in around 2003 and predominates until 2010. In the figurative paintings produced during the period from 2003 to 2006 – in which the light and effect of transparency from the surface of the canvas covered with abstract shapes in a limited colour scale have prominence – faces and bodies emerge, appearing as if from a parallel, dreamy world of unconscious thought processes. Through the use of contours that are intense and uniform in places, and then again almost disintegrating, softly visible through the language of colour on the surface of the painting, the images come, anchor themselves, but are on the constant verge of disappearing. This light period that brims with cheerfulness and the joy of life, is followed by the artist’s representationally and expressively most prominent cycle Interlacements (2007–2012), imbued with a prevalence of darker, earthy tones and feelings of anxiety, vulnerability and unease. The series is a fascinating journey through a highlighted figurality, and inexhaustible imagination. In his recent creative period (2010–2014) Topolovec again returns to non-mimetic visual language. To a precisely defined intertwining of abstract forms that constitute labyrinths of spatial relations with an almost mathematically precise consideration of every detail.

The retrospective exhibition of Konrad Topolovec was produced with the help of private collectors and owners of the paintings, and in cooperation with the Štore Ironworks Museum. It is installed chronologically with the selection of works including the main periods of the artist’s oeuvre: figurative works of the 1980s, painting collages 1989–1994, abstract works 1993–2000, figurative works 2003–2006, the Interlacements series 2007–2012, and recent abstract works 2010–2014. The exhibition is financially supported by the Municipality of Celje and the Ministry of Culture of the Republic of Slovenia. A catalogue featuring the writings of mag. Alenka Domjan and mag. Petra Kapš and an overview of works is being produced.