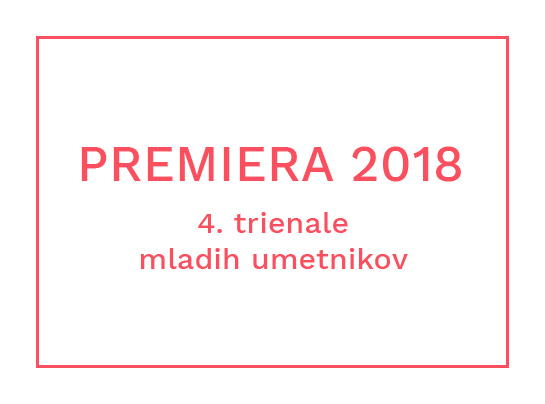 The fourth triennial exhibition of works by young artists, which we have chosen through an open call, is a reflection of the recent, media-diversified art production, manifold in its content and form. On view are the projects of twenty Slovenian artists, who have either finished their art studies or have already begun to successfully forge their way to professional presentations of contemporary art. This year’s selection has led to more or less open thematic points, expressions, policies and experiences tied to the body and the space or environment. We have tried to combine three aspects, which make up their artworks, into a whole. The first is the depiction and use of the body as a motif, an art medium with several problemic levels. The second is the experience of a geographically or otherwise identifiable space, which, among others, involves a temporal dimension. The third is the expected relationship between the body, its language and the physical space surrounding it. Even though the works do not involve direct performative action or even radical forms of staging the body, it nevertheless exposes the interest for its use in various art contexts. The set-up, which contains the aesthetic relation between the space and the subject, often involves the viewer himself.

The human body is, of course, the one that participates in the construction of social reality, to summarise the sociological communication models. Among other things, it also forms cultural significance or becomes an aesthetic cultural object itself.[1] The body is therefore the first means by which creators face the whole history of art and the case is no different with contemporary artists. As they enter the field of researching the relationships between the aesthetic and the social, the body is immediately within reach, be that their own or that of someone else. Performance as a motif, self-depicting subject, art material, reference, representation of the idea.

The painterly address to perceiving the female identity is humorously depicted by artist Eva Lucija Kozak, where the images stretched between reality and fiction reflect on the complex “female condition”. Meanwhile, the paintings of Kaja Urh, combined with a projection, trigger the visual effect of associative matching of the image and our view of the selected figures from popular culture. In the video (Without), Lea Culetto problematizes the appearance of the woman’s body in advertisements for personal care products in an ironic way. Through the interventions into her own body in her photographic series Untitled, Maruša Mazej observes the characteristics of the initial physical transformation, then the changes of the bodily into the medium, and finally into the visual material. Tajda Novšak refers to the structure of human skin, producing an iron structure, a kind of secondary protection, which can be used to manipulate the fenced personal space that we adapt to the body. Artist Živa Božičnik Rebec also bestows her attention on the imitation of “living” materials in the Towel series, searching for new technological possibilities in her works that come close to natural bio-structures. Conversely, in her video installation Inside/Outside, Saša Nemec looks for a digital spiritual space within the recorded and abstracted interior of the physical body.

The basic activities of the body, which are inseparably bound to time and space, are also considered by the artists through everyday actions. The monitoring of the artist’s own sleep by Urška Aplinc is the process of searching for those in-between moments (blind spots), which the artist herself does not perceive during (not) working and questions them together with the viewer. Neža Knez looks for a loop that occurs with unknown, obscure language structures. In the already performed and recorded reading performance, she re-checks the extent of its (mis)understanding, (mis)perception in the new time and space. Artist Jasmina Grudnik searches for connections between her mental state and the state of random strangers through conversation, and then writes a “street anamnesis” into the space. Danilo Milovanović reverses the logic of the shortcut and through urban interventions turns to slowed down movements and reflection on our physical as well as mental movements, from the starting to the finishing point. In the project The Temporary Parameters of One’s Own Work, Maja Burja introduces the parameters of time, repetition and space as well as the notion of authorship, while trying to preserve the physical point of view of the thing.

In the video made by Lara Reichman, we can see how the author settles into the uninhabited space and even physically wraps herself in it through the performative activity. The artists also express the interdependence of the subject and the environment in a documentary manner. The Ex-topia project by the Plateauresidue duo explains the changes in our natural heritage, where the two artists, in addition to conducting interviews, carry out a costumed ritualistic protocol, taking into account the characteristics of the Triglav landscape. A didactic and documentary dimension is achieved by Searching for oo by Miha Godec that we enter virtually through 3D technology, which, as an extension of our perceptual functions, creates an area of contemplation. In contrast to her previous two projects, artist Lene Lekše resorts to the fictional landscape, a mountain, around which she builds a story, replacing the absence of the body with the presence of the viewer and his involvement in the fictitious landscape. A painters’ view of the space through various reflections is given by Rok Horvat, who aspires to a painterly interpretation of the indeterminacy of time, location and event, oppositely, Tina Konec defines (night) time in the contours of nature that change into abstract forms, and Doroteja Dolinšek, who breaks down structures by means of colour and composition through the visualisation of bodies in space, provides a new, internal view of the structures/phenomena inaccessible to everyman.

When interpreting the artworks in the exhibition, which make use of diverse approaches typical of contemporary art, let us once again emphasise the role of the viewer. The latter also acts as the bearer of cultural significance and establishes a relationship with the aesthetic cultural objects. The viewer, who is in some of the works required to step into the piece by the artist, adds meaning to the project and process of communication between the art institution and the general social horizon through his understanding of the seen. Through the many roles, the artist and the viewer can finally confirm the solid relationship between the body, cultural objects and social meanings, the inexhaustible placement of all the dimensions discussed within the contemporary art practices. 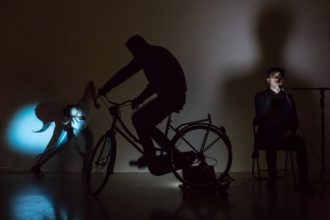