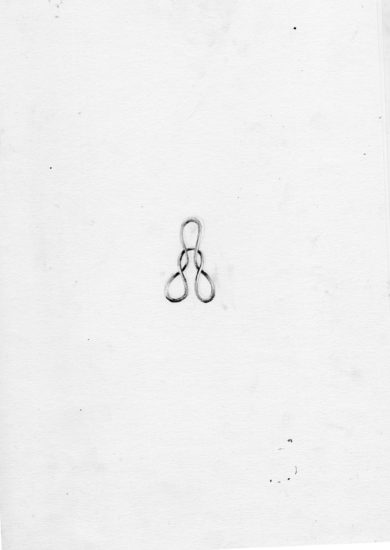 Meta Grgurevič, The State of Return_situation 2, 2019, installation; Courtesy of the artist 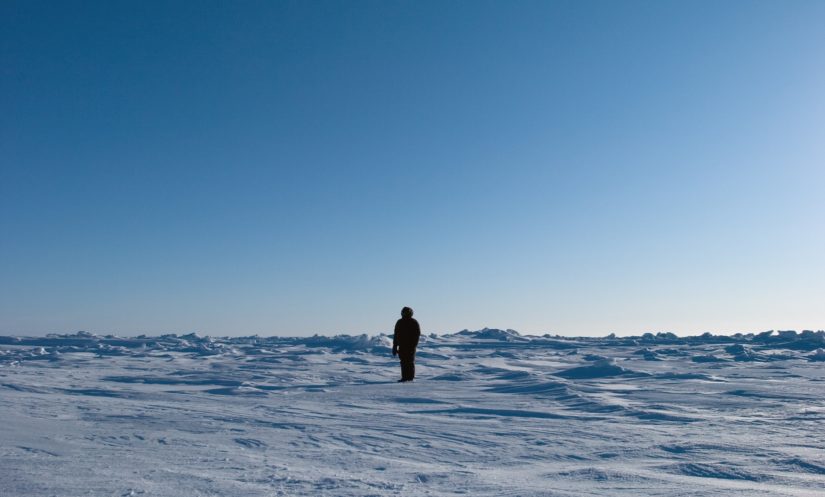 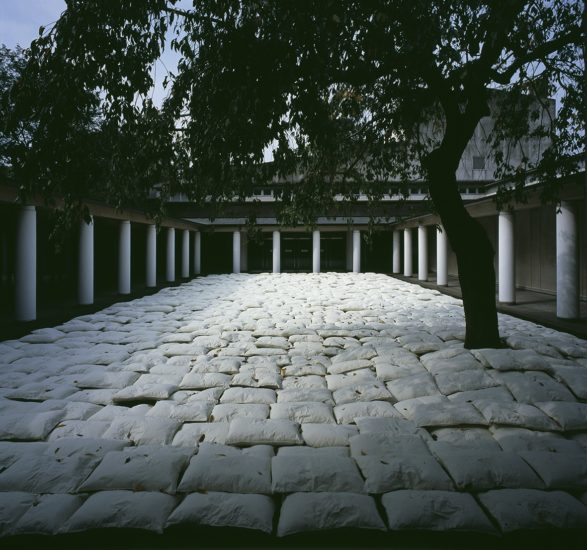 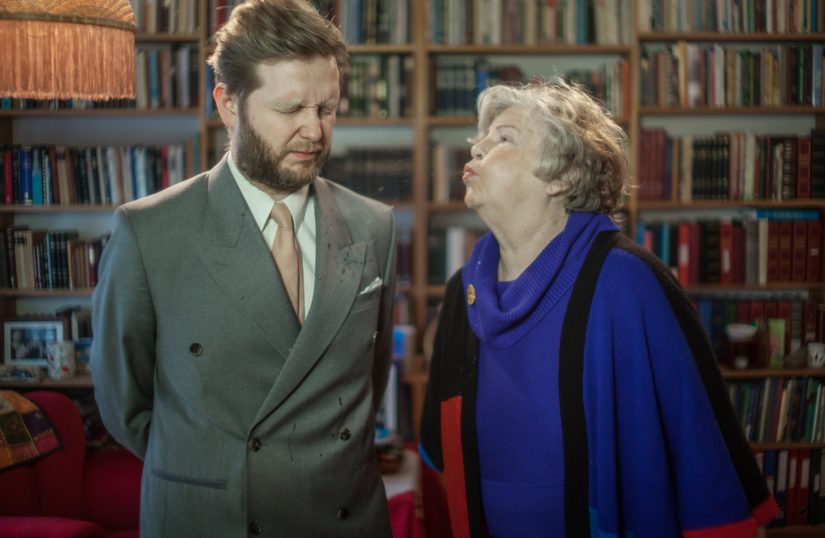 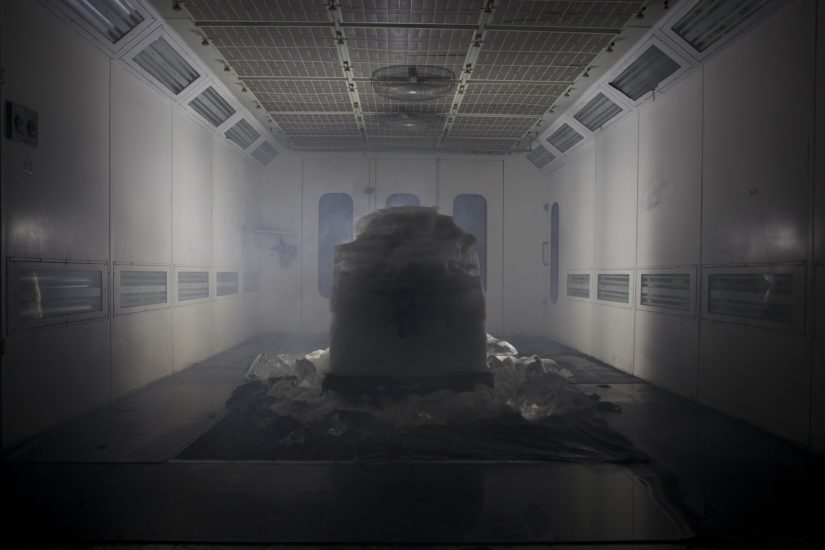 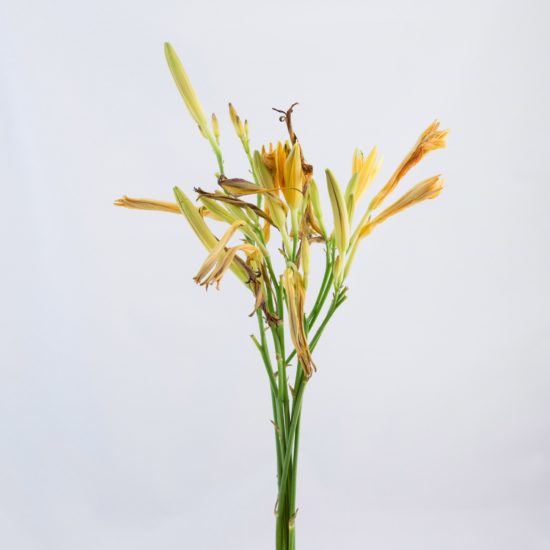 Ana Straže, These flowers will never die, 2016 – 2017, series of photographs; Courtesy of the artist

Davor Sanvincenti, Before the First Light, work in progress, from 2011, series of Polaroids; Courtesy of the artist 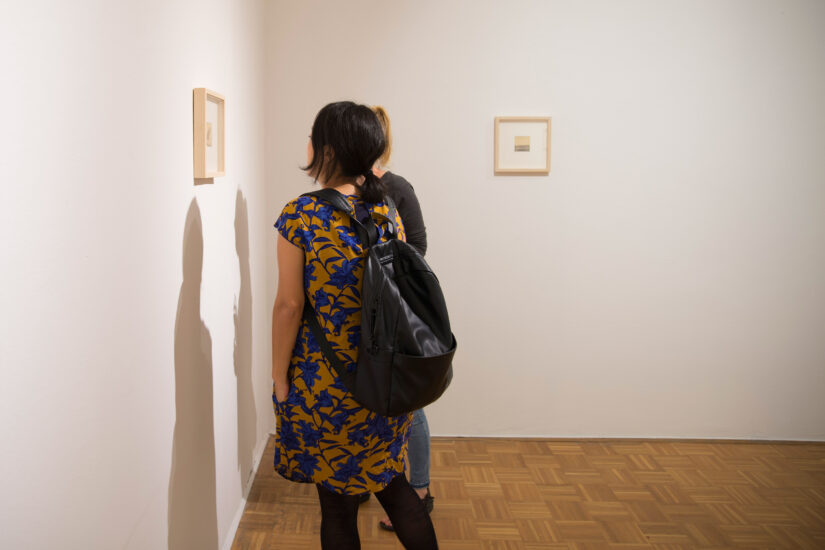 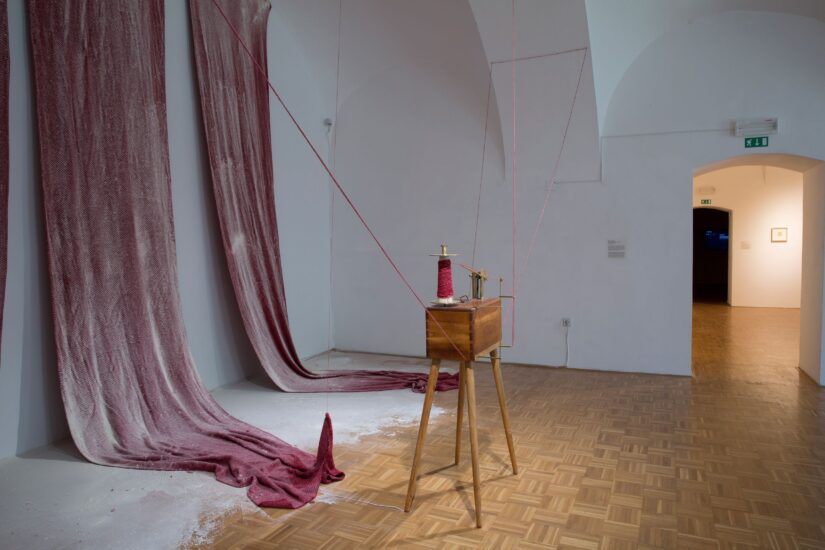 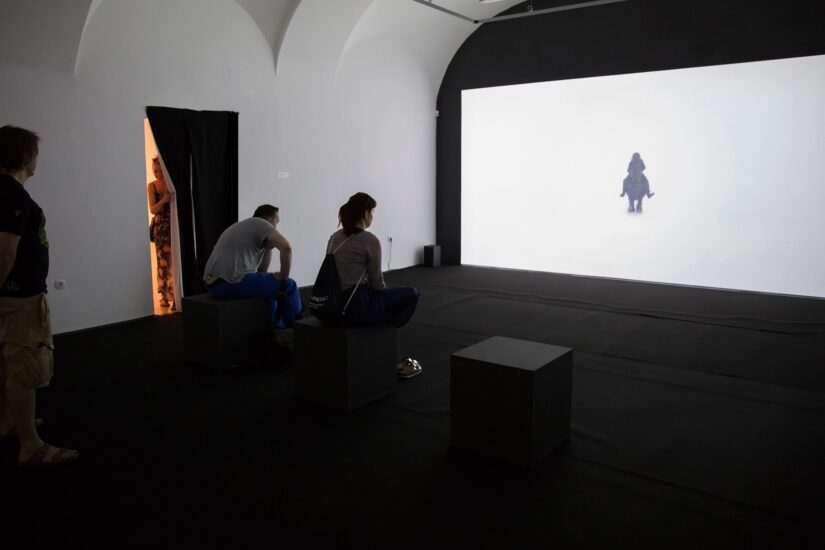 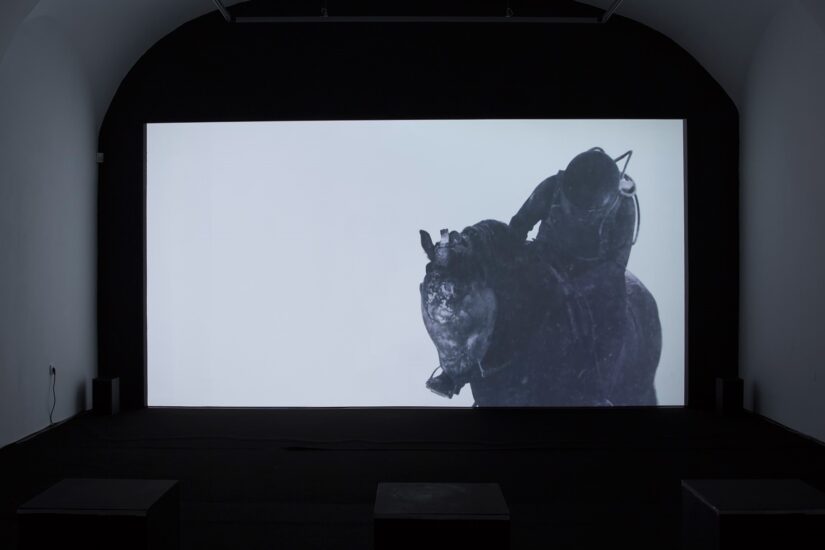 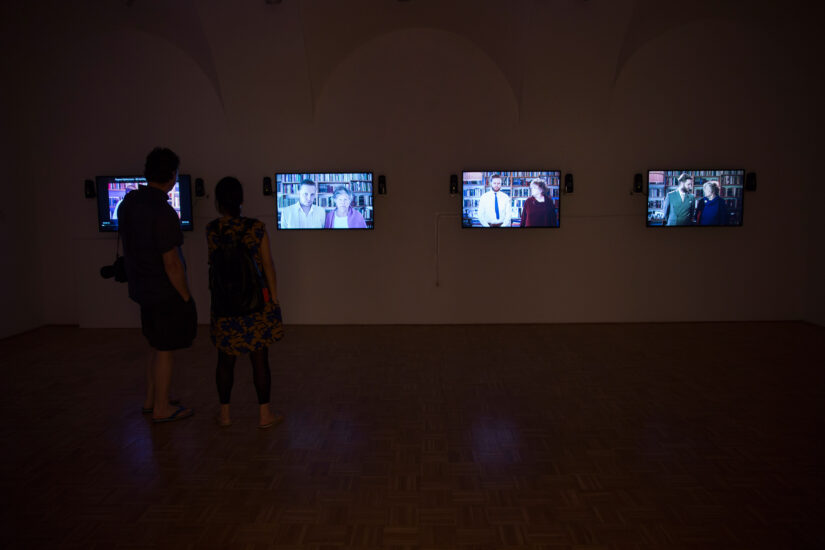 Ragnar Kjartansson Me and My Mother, postavitev / installation view 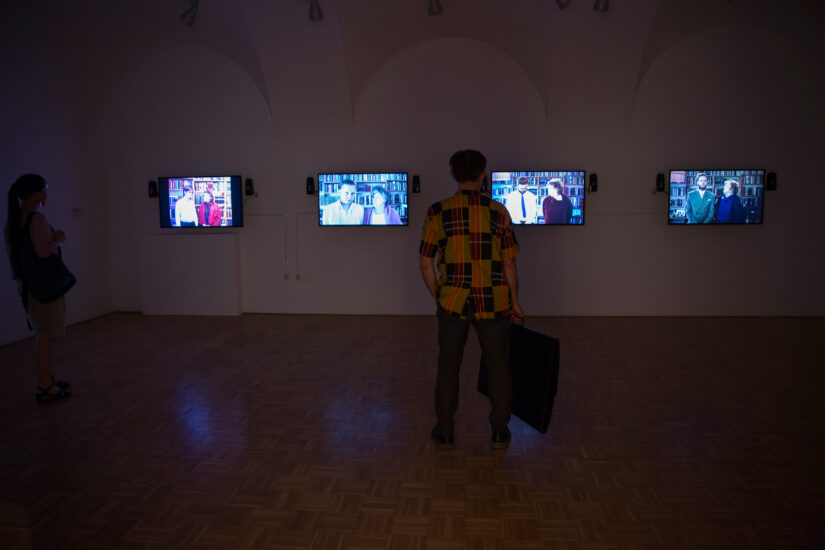 Ragnar Kjartansson, Me and My Mother, postavitev / installation view

Thinking about time in contemporaneity, where time is constantly running out and we are in a persistent state of rush and constant stimuli, contemplating the nature and experience of time, its fragility, the irreversibility of the moment and the event in time, being aware of the passing of time … thinking about time in a society that is controlled by the constant extension of work time into private time, experiencing the stressful time pressures, and the constant feeling that consistent and fast action is required or else we will find ourselves on the margins of society … thinking about time, this basic human living category in a society that nourishes and is dominated by the belief that time, which is not efficient and productive, and above all, which is not a source of profit-making, is time wasted … As individuals we perceive time differently, perhaps we do not even think about it. On the one hand, we take it for granted and on the other hand, it almost seems as if thinking about time in contemporary reality is, in fact, contrary to its basic values.

The exhibition that springs from this context speaks of time as such, and above all offers a sensing of time. Not the chronological, measured, but more profound time, that is in constant movement and interplay. The past never truly goes away and the future is already here in our minds right now. By talking about cycles, repetition, passing, returning, slowing down, duration, the constant cycle of life and death, it is the interest of the exhibition to offer the viewer an experience of time that deviates from his usual perception in everyday life. It focuses on artworks in which time stops, repeats, extends and deepens, particularly through the strategies of repetition and slowing down, so that it becomes almost tangible matter, the opposite of linear time, and the complete opposite to the speeded-up time created by Western society. It focuses on works that almost allow the viewer to step into time, to almost see it and feel it, on works that intensify the awareness of time through their structure as well as special subtle, poetic and emotional atmosphere.

The opposite to contemporary ideas about work and time, is slow manual work, the transformation of an Excel table of various financial transactions into a woven scarf; each drawing is the materialization of time, the result of exactly one hour of the continuous repetitive drawing process, a drawing and time simultaneously; material transformed into artwork, a used up pencil on a receipt roll, speaks about being spent – Accounting, Eight Hours of Work and Jolly Neonorange are the works of Anja Jelovšek, which encourage reflection on contemporary concepts of work and the trend towards the intensification of work, as there is more and more work to be done, more and more quickly. In the works that use the form of repetition, in which an action or event is repeated over and over again, there is always a difference in the repeats that are not regular in the sense of reproducing the original. A new or additional meaning is inscribed in these differences. The passing of time, in the piece Me and My Mother by Ragnar Kjartansson (the exhibition presents all four video works produced to date), in which the only two protagonists repeat the same emotional, unusual and surprising performance every five years, the same situation in the same space, but with each time they are five years older than in the previous repetition. The stretching of time, through the repetition of a specifically defined moment in time in the piece Before the First Light by Davor Sanvincenti, who also highlights the unrepeatability of the moment at every time with a single Polaroid shot, as he captures a landscape imbued by special light and silence, moments before the dawn of a new day, at whatever location he may find himself. Or its stopping, in the project These flowers will never die by Ana Straže, who postpones the transience of life by repeatedly performing the same thing over and over again, photographing flower bouquets that have been given to her as gifts, just before they finally wither away.

The thought that man is probably the only being with the realization of dying appears as a quote in the work Lost in Time by Patrick Bernatchez, a 46-minute film about being lost in time and space, and about the constant cycle of life and death. Thick, slowed down and indefinable time, omnipresent and tangible, totally embraces the viewer in the work, full of visual repetitions. With each of the many white cushions laid on the floor in the large photograph of the site-specific installation Untitled (Pillows) by Matej Andraž Vogrinčič, who always uses everyday objects in his installations and stems from the social and cultural context of the concrete space (the installation was an intervention in the city of Saitama near Tokyo, which is primarily known as a place to sleep), a standstill and calming down take place, time is stopped, inviting to rest and dream. The frustrating feeling of inevitable destruction and ending that cannot be prevented, cannot be changed in any way. It captures the viewer in the installation The State of Return_situation 2 by Meta Grgurevič in the subtle language of the fragility of the longstanding process, of transience and death. Thirty square meters of soft and mighty knitted fabric slowly disappears in it, which is unpicked by the mechanism slowly but steadily and relentlessly. Time is actually existence as death occurs, it finally stops and moves and at best becomes the memory of another. In the Memory Preservation piece, Tomo Stanič, with repeated identical forms, in which only the light of a burning candle on the undeveloped negative is captured and preserved (each shot was made at one of the Ljubljana cemeteries on the Day of the Dead), placed between black colored glass panes so as to not be destroyed by the light, records the invisible and the past, departure, silence and memory.

Time is one of the notions most explored in history, but at the same time the most elusive and open, multifaceted, and there are as many concepts and experiences of time as there are those who think about or perceive time. The tiny figure of the artist, who persists in silence and in the extreme cold of the North Pole for 24 hours, almost unmoving, in a slow turning of the clockwise direction, while the Earth turns in the opposite direction, gives rise to a feeling that is greater than life and not tied to time. In the piece Nummer negen, the day I didn’t turn with the world by Guido van der Werve, the day is turned around with an intense, sublime atmosphere, into a hypnotic timelessness as the artist literally did not turn with the world.

Meta Grgurevič (1979, Ljubljana) finished her post-graduate studies in painting at the Venice Fine Art Academy in 2007. From 2002- 2005 she, Mara Ambrozic, Jasmina Cibic, and Mery Favaretto founded and ran the Passaporta group, which operated between Venice, Ljubljana, Granada, and London. Since then she has frequently worked in collaboration with other artists: Uröa Vidic, JAäA, Tine Grgurevic, Mark Pozlep, Nina Vidrih, Kalu (Luka Uröic), Junzi. As well with people from fields of mechanical engineering and electrical engineering: France Petac, Otto Urpelainen, and Martin Podlogar.

Ragnar Kjartansson (b. 1976) lives and works in Reykjavík. Major solo shows include exhibitions at the Reykjavík Art Museum, the Barbican Centre, London, the Hirshhorn Museum and Sculpture Park, Washington D.C., the Musée d’art contemporain de Montréal, the Palais de Tokyo, Paris, the New Museum, New York, the Migros Museum für Gegenwartskunst, Zurich, the Fondazione Sandretto Re Rebaudengo, Turin, and the BAWAG Contemporary, Vienna, among others.  Kjartansson participated in The Encyclopedic Palace at the Venice Biennale in 2013, Manifesta 10 in St. Petersburg, Russia in 2014, and he represented Iceland at the 2009 Venice Biennale. The artist is the recipient of the 2015 Artes Mundi’s Derek Williams Trust Purchase Award, and Performa’s 2011 Malcolm McLaren Award.

Tomo Stanič (1982) graduated at the Faculty of Architecture in 2010 and completed the MA program of sculpture at the Academy of fine arts and design in 2014. He earned his Ph.D. in Theoretical Psychoanalysis at the Faculty of Arts under the mentorship of professor Mladen Dolar in 2017. He is the author of the book Arhitekturni gledalec (The Architectural Spectator), published by Studia Humanitatis. He published articles on contemporary art in magazines such as Šum, Problemi, and Praznine and lectured on related topics in Museum of architecture and design (MAO), Gallery of Modern Art and Museum of Contemporary Art Metelkova (MG+MSUM). He has shown his works at solo and group exhibitions in Slovenia and internationally.

Guido van der Werve (1977, Papendrecht) pursued studies in industrial design, archaeology, music composition, and Russian language and literature at several universities in the Netherlands before beginning to create his first video documented performances around 2000. Since that time he has created a variety of works, including films, videos, and artist’s books in chronological order from two to seventeen. Recent showings of his work include solo exhibitions at FuturDome, Milan; the Seattle Art Museum;  Museum of Modern Art, New York; High Line, New York; Giuliani Foundation, Rome; De Hallen Haarlem in the Netherlands.