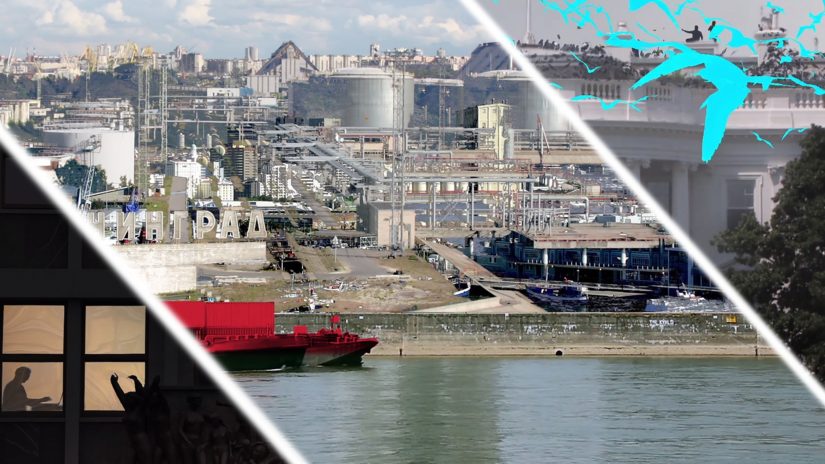 The art practice of Ana Čigon covers a broad field of activity in terms of both media use and subject direction. The artist, who started off with painting and video art, also uses the medium of film and performance in her current practice. She takes on the feminist perspective to addresses broader social issues pertaining to gender issues and the position of women in society, analyses the conditions of precarious work and inadequate cultural policy, and has been exploring the geopolitical features of space in her most recent projects. She often uses activist techniques and elements of humour as well as satire to outline a particular social reality.

At Likovni salon, she is presenting the Phony Towns III installation, which touches upon the issue of space. As the title already suggests, the work invites reflection on the geopolitical dimensions of power. It is an outline of a time, where the current political changes are significantly transforming the image of the city, social dynamics and quality of life within society. In the installation, the viewer travels through local, European and global spaces as well as space itself. He observes the footage of urban landscapes, in which different voices speak to the towns and cities, countries and wider territories. These tell of mutual relations, marked by demarcations and divisions when capitalism had already substantially and almost irreversibly broken down the networks of solidarity and the pursuit of a better future. It is precisely the power or dependence on capital that is the common binder of the cities and territories that are shifting the care for its citizens to the care for the creation of economic value. Phony Towns III is an installation that is supplemented with each new presentation through the introduction of new contents tied to the space where the work is exhibited. For the Celje edition, the artist has addressed the environmental issues and the local legacy of industrial plants, inscribed in the controversial pollution of the air and soil within the city. In doing so, she refers to the multidisciplinary projects of Celje artist Andreja Džakušič and Portuguese artist Marie Lucie Cruz Correia, both of whom have worked intensively on this pressing topic, each in their own way.

The installation with video, new additions and a text piece leads the viewer to reflect on the existing divisions of the space, where the centres of power substantially control the peripheral areas and consolidate social subordination. At the same time, the work invites us to consider the possibilities of active action and encroachment into the social antagonisms.

Ana Čigon (1982) completed her master’s degree at the Academy of Fine Arts and Design in Ljubljana and at the University of Arts and Industrial Design in Linz, Austria. She works in the field of contemporary art practice, using various mediums such as video art, documentary and experimental film, performance, animation, installation, etc. She presents her work in national and international exhibitions and festivals, including: ISCP, New York; Istanbul Modern; A plus A, Venice; Ars Electronica Festival, Linz; Stacion – Center for Contemporary Art, Prishtina; MSUM, Ljubljana etc. She is the recipient of the OHO Award and her films have been featured in the competition programmes of many international film festivals. Her animation Rebellious Essence has won her five awards at international film festivals.