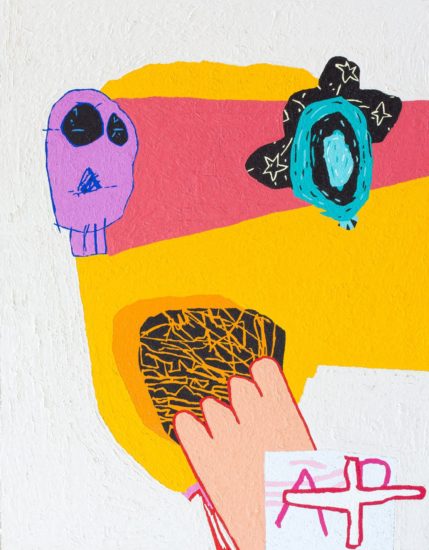 “Who is the author of the masterpiece in the commentary?”, was the question of a poll among the hate-filled Twitter posts about a photo of Arjan Pregl’s installation of the Carnival painting series, which was included in the group exhibition of contemporary Slovenian painting Time Without Innocence by the curators of the Museum of Modern Art in Ljubljana. The possible answers proceeded in the following directions: a three-year-old, a nine-year-old, an academy-trained painter and the Slovenian Picasso. Pregl responded with a relaxed comment to the conservative starting point that reopened the well-known dilemma of what is or is not art, who can be an artist, and what is a “real” work of art. As well as with the new series of paintings presented by the artist at Likovni salon. Reflecting upon the sources of painting practice, its mimesis and the perception of contemporary visual art in general, takes into account all possible answers since it is precisely these that intriguingly destratify the present position of the painting medium, the ways in which it is understood, its mythologies and its cultural and historical roles.

With careful consideration, Pregl stemmed from the drawings of his children in the series, which served him as the basic building blocks of the painting. He then segmented the motifs, combined them arbitrarily, magnified them to a suitable size, coded them by colour. He further upgraded his pieces by abiding to the properties of treatment and application of colour, attention to detail, composition and the whole. In the pictorial sense, Pregl persists and continues with his saturated canvases of strong colours, changes in the rhythm of the thick applications of paint, as well as the disclosing and covering up of the painterly planes or elements in the painting. We perceive it as embodying Colour Field Painting, Abstract Expressionism, as well as New Image Painting. The painter considers styles and directions in painting as formal tools, and at the same time counteracts them with a clearly defined, therefore completely non-arbitrary gesture and content. Arjan Pregl’s paintings are never just paintings and they are never mere statements. They combine the artist’s continued interest in the history of painting on the one hand, and the game of meanings that he often uses in his literary or daily writings, on the other. The painting is often a more simple explanation of the multi-layered nature of the semantic challenge, but it is never just a comment. Pregl uses words skilfully as a critical response to topical social goings-on, political controversies or to record more intimate observations. Even though works imbued with irony and humour are a key part of his creative process, he inserts his statement into his art project with playful investigative fervour rather than mere provocation.

The very Dada-sounding title of the exhibition, which the painter came across in the animated film The Boss Baby, splits open the crevice of the historical discourse on painting, the reading of art language. Similarly as Tomaž Brejc writes in the foreword to the Poker collection, that Šalamun’s poetry is “primarily an active strategy of rearranging words”, “not so much a philosophical discipline or play with things”, Pregl’s work is also concerned with the arrangement of pictorial elements that can then be “read in themselves, establish a text, but never become the prey of romantic, symbolic metaphorisation.” Although we are far from the time of such avant-garde phenomena, the series reflects the duality of time that can be experienced through the exhibited series. The moment in which the children’s mimetic form appears does not just make actual reference to children’s drawing, nor does it just deconstruct modernist principles where, at the end of the day, Pregl also finds the autonomy to his stroke, but can at the same time be understood as imitating a statement that equates to any abstract or contemporary painterly gesture with random infantile play, with seeming simplicity, with a stereotypical reduction in the understanding of the concept of imitation.

Pregl belongs to the generation of painters who referred to the subjects of popular culture, visual language and the strategies of the media image directly but critically right after the year 2000. This time, the artist even finds a basic starting point for his work in the host of hateful tweets that aggressively point their finger at the contemporary artistic practices with apparent advocacy of free speech.
Arjan Pregl, therefore, once again imaginatively interweaves formal pictorial starting points with theoretical reflection. He reflects on the positive and negative effects of the modernist painting, the relationship with the latter, as well as contemporary painting, intertwined with the many aspects of social incidents. The artist says that his paintings are perhaps political in that the viewer may wonder about the space and time in which certain artworks are being produced, and that they indirectly shake up the expectations and ideas about the immediacy of art, about sincerity, about observation, as well as thinking about one’s own prejudices. And this is also what makes the space of Likovni salon, the foremost art exhibition venue in Celje, perfect for his presentation. Similarly as to painting, the space has undergone a transformation from modernist ideas to a meeting point of new discursive practices and contemporary art formats, at the same time experiencing a fair share of public outrage over contemporary gallery presentations, critiques, primarily scaled down to the desire for the beautiful. The GUGU GAGA series puts on the mask of a child’s gesture beautifully this time. Without cynicism and ridicule, it seeks to return value to both the child’s and the artist’s creativity, both of which in no way stand alone, as is also supposedly the case with the viewer’s perception of the seen.

Arjan Pregl (1973) completed his postgraduate study of Painting and Printmaking at the Ljubljana Academy of Fine Arts. He is one of the more prominent Slovenian painters, who has repeatedly presented his works at leading exhibition venues throughout Slovenia (City Art Gallery of Ljubljana, Maribor Art Gallery, KIBLA, Maribor, Museum of Modern and Contemporary Art Koroška, Equrna Gallery, Ljubljana, MSUM, Ljubljana), as well as internationally (Croatia, Montenegro, Sweden, Japan). His works have been featured in many reviews and selections of Slovenian visual art. The artist works in the field of painting, printmaking and drawing. He is also an illustrator, a columnist and a writer. He lives and works in Ljubljana.