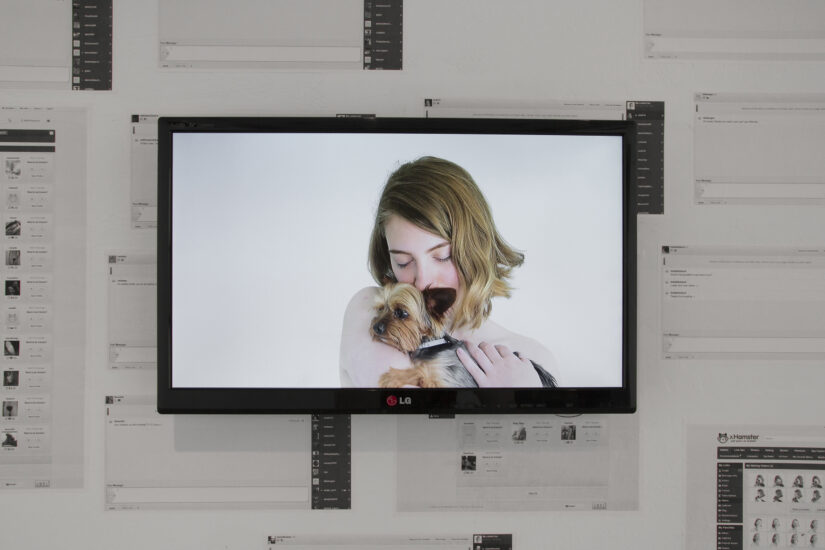 Young Celje artist Iza Pavlina is presenting her multimedia project entitled Isabelle Peacocks for the first time at Likovni salon. An interest for issues related to sexuality is a characteristic aspect of her work. She creates fictional identities, through which she steps into the virtual space to explore the phenomena of social anomalies, power relations and the question of how to establish communication with a specific target group of web users by manipulating the image of her own self. She uses specific strategies to objectify her body, primarily addressing the male population on various online portals. She presented herself to the general public for the first time with her piece Talk to Strangers (2014), where she dealt with the phenomenon of paedophilia on social networks. For the project she took on the role of an underage teen, getting into sexual conversations with much older men in online chat rooms. She unveils the lightness of online scams, where role playing is common practice, even when it cuts into the field of the illegal. What is the hierarchical structure of those involved and how much reality lies within the conversations is difficult to define, the piece particularly highlights the typical nature of the virtual space as a place of encounter of manifold interests.
With the project prepared specifically for Likovni salon, she continues to explore the links between art and sexuality within the virtual. This time, sexual practices directed towards unusual fetishes are presented as her point of interest. She has focused on fetishes that include quicksand, balloons, food and animals, and looked into the ways in which they appear in porn videos. In conceiving the piece, she again used her own body as the basic medium of communication. She recorded four staged situations in the studio, where she performs the selected fetishes in quite a different manner as is usual for porn videos. She has again created a fictional identity and published the recorded videos on a pornographic website under the pseudonym of Isabelle Peacocks. In addition to the staged videos, we can view a series of images from the chat room in the exhibition, as well as read the conversations and get an insight into the other users. These are positioned into the space as wallpaper, accompanied by a poster of the profile of Isabelle Peacocks, from which we also learn about her interests, hobbies, etc.

The work of Iza Pavlina is marked by working in the public space using processes in which various entities appear, who are unaware of the fact that they are not merely spectators, but an integral part of the artwork. In such a way, in addition to her own image, strangers, as well as current social and intimate worlds, become the medium by which the artist addresses the viewer in the gallery space.