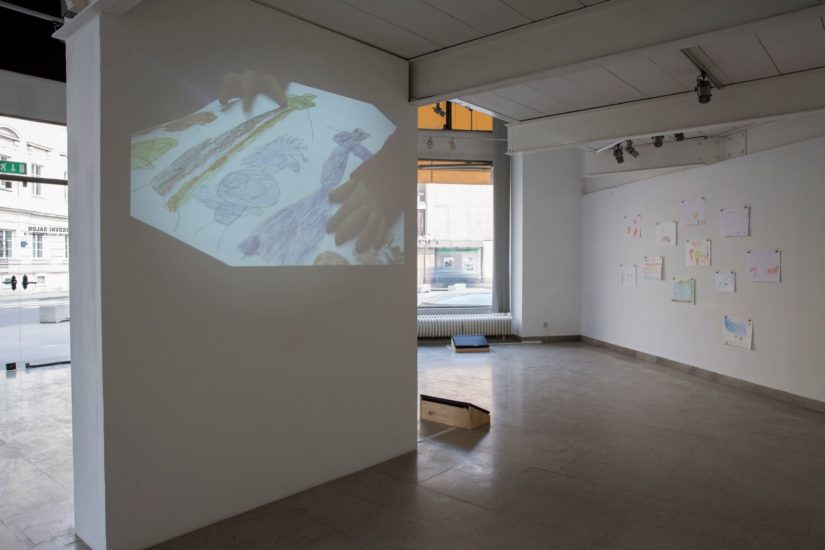 The art process of Neža Knez is marked by the issue of the body and sensory perception as well as the exploration of the boundaries that make up the constituent tissue of everyday habits and become the object of new experience and cognition with merely minimal intervention.

Appearing in the public space is essential for the artist, where she carries out actions, performances and public readings. Her greatest interest as part of this lies in the experience, which is created through the process and opens up different ways of perceiving the space. Her projects are often created during various residences using random materials that are barely noticeable due to their ordinary qualities, such as the soil in a city park or a part of a pavement. The works can be understood as a form of communication with the new environment that the artist is getting to know through her actions, in which she intertwines recurring, seemingly useless things to do, with the element of the absurd. Such a gesture is digging a hole. In her piece For-Nothing during a visit to Germany, she spent three days digging a hole, which she then returned to the original form at the end of her action. She then asked the visitors to the intervention how they saw her action. Her latest work Square (2018), created in New York City, takes a part of the street as a starting point – an image of a square, which the artist cleans persistently and deliberately at the same time for twenty-two consecutive days. Through her presence and repetition of everyday household tasks, she builds a temporary situation and makes contact with the residents of the city in such a way. She makes short interviews with them, asking them how they see her action. Collecting interpretations of her own work is vital for the practice of Neža Knez since she sees art as a connective mechanism. She expresses the invisible level of exchange through minimal material traces, which are often the documents of social ties. She exhibits the written statements of passers-by, or attempts to record the most intangible experiences, such as a public reading of poetry in a foreign language. Her Readings (2016) project entails reading in various places, mostly in city libraries, in a language that she does not understand, whereby the language no longer has the function of transferring meaning but becomes bare sound. Setting yourself up in different situations that emphasise the meaning of the unknown and unpredictable, opens up the possibilities for the multi-faceted exploration of the limits of the body and mind.

At Likovni salon, she is presenting herself with the Deux Ex Machina (2018) project, created in cooperation with the children of the Oton Župančič kindergarten (Ljubljana). The artist asked a group of children about a vision for the future and asked them to draw what they consider to be really important on a piece of paper. The drawings by the children became the starting point for discussing a common idea of the near future and its importance. On the basis of the collected material and many conversations, the children came up with the idea of a machine, which is a kind of hybrid being, has many abilities and potentials for improving the existing social order. The artist transferred the sketch of the hybrid machine into reality. She created an object – model with the properties attributed to it by the children. The exhibition presents the project in its entirety for the first time. In addition to the object, the drawings by the children created in the initial stage of research, a documentary video where the children explain their vision of the drawing, the final conceptual draft of the machine as a magnified sticker and an animation, are also on show. The artist is developing short animations as footage of the children’s statements. These are presented in the exhibition as an invitation for the actions in the public space planned for the future. The project as a whole emphasises the pedagogical principle based on the potential of self-directed learning, teamwork and collective artmaking as horizontal activities.

Neža Knez (1990) completed her master’s degree at the Academy of Fine Arts and Design in Ljubljana. She has presented her work in solo (Square, P74 Gallery, Ljubljana, 2019, Transfer, Pivka House of Culture, 2018, etc.) and group exhibitions (Talking about images, Kunsthalle Graz, Graz, 2018, Let’s Roll Our Sleeves Up, Likovni salon, 2018, Mediterranea 18 Young Artists Biennale, Tirana, 2017, etc.). She has received several awards for her work, including the Prešeren Award of the University of Ljubljana for Outstanding Academic Achievements (2015) and the OHO Award (2018). She is the recipient of a two-year residency for young artists at the Švicarija Creative Centre (2018).