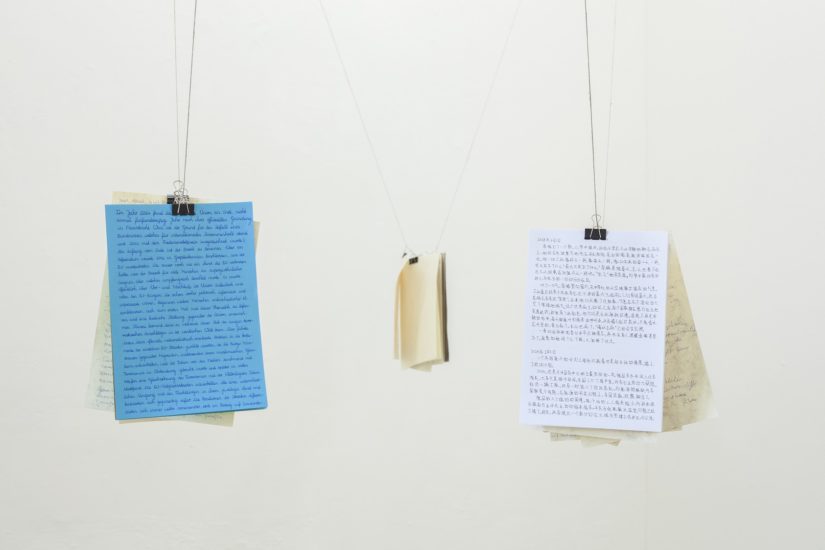 Artist Daniel Djamo presents the Past Futures project, prepared specifically for Likovni Salon. The work was produced during the artist’s two-month residency in Celje as part of the AIR CELEIA programme led by the Centre for Contemporary Arts.

Daniel Djamo works in film, installation, photography, performance and sculpture. Typical for his diverse conceptual practice is the exploration of issues revolving around national identity and migration. In doing so, he often refers to his own experience. The transfer of his own experience into fictitious stories is an essential element of his work, in which objects placed in a space, as well as found objects, take on the function of the main character. It is precisely this exploration of the possibility of the narrative within the visual field that is in the forefront of the artist’s interest. In this exploration, he also makes use of appropriation and the ready-made principle. His projects can be read almost as scripts since he attaches personal qualities to the objects and places them into a mutual time and space relationship in order to create a consistent narrative thread. The artist’s practice is also determined by his travels since he has been participating in numerous art residencies around the world in the recent years and has taken up an almost nomadic way of life. His projects are therefore being made in direct connection with the place in which he temporarily resides.

During his residence in Celje, he collected items on the streets, in the rubbish bins or while strolling about the nearby lanes. In the set-up at Likovni salon, the artist places the objects into interconnected compositional units, thus building up the whole installation, which is again based on a narrative. He has developed a story from the found objects, which takes place in the future. The objects supposedly belong to the Slovenian migrants fleeing to Germany after the fall of the European Union. In the project, Djamo plays around speculatively with personal experience, historical events and possible scenarios that, on the basis of the current social events, foresee possible future events.

Daniel Djamo (1987, Bucharest) has received several awards for his work in the field of the visual arts (Premio Combat Award, 2015, Henkel Award, 2013 …) and film (Bucharest International Experimental Film Festival, 2014, Victoria Film Festival, 2014 …). He has exhibited in numerous international exhibitions and film festivals. Since 2011, he has taken part in many art residencies around the world. He is currently completing his PhD studies at the National University of Art in Bucharest.