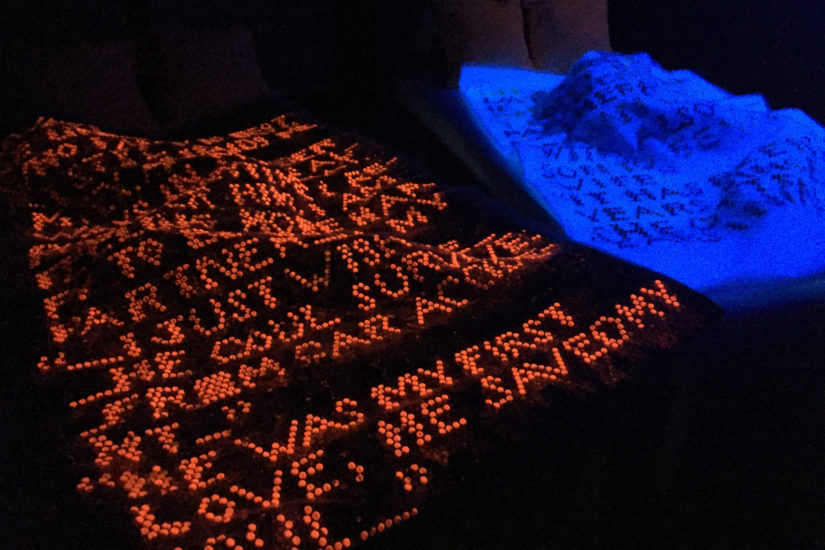 The Secret Desires by artist Keiko Miyazaki are made up of four installations and a series of drawings – five parts that interconnect both visually and in terms of content. Together, they form a complex interweaving of the spoken, the textual and the painted, lighting effects, objects and items taken from everyday life. The artist uses these to thematize the world of relationships, love and sexual relations, experiences, views and inclinations, inserting desire, secret and memory into them. She reminds of the inseparable connection and folding of the present into the past, placing the question of faithfulness, deceit and guilt into consideration.

In a way, the set-ups speak to the viewer in a direct way – for instance with the symbolic meaning of the bed and the colours in the Mysterious Bedroom, or with the intimacy of the small Fetishes spaces intended to be viewed by one person only, which can be observed and sensed undisturbed from prying eyes. This is also done through the refined associative nature of the words and sentences that glow seemingly forever as if indelible in the Tower of Secrets, or can be read illusively in the play of changing light on the bed-cover in the Mysterious Bedroom – in both occurrences taken from the artist’s dialogue with the people that can be seen on the screens. Or else the visitor is spoken to by the arabesque-like tenderness created by the delicate strokes and washes of the small or large-scale drawings floating in the space.

Apart from the drawings, the set-ups are based on the confessions and statements of the people that answered the questions posed by the artist. By incorporating their narratives – at times more reserved, then again surprisingly sincere and candid (in the form of videos in which the identity of the protagonists is blurred) – the Secrets Desires highlight the dimension of the distinctly personal and intimate. The viewer almost finds himself in the pleasure of secretly listening to the intimacy of others. But not for long. The confessed intimacies, which Keiko Miyazaki upgrades into suggestive environments by adding other visual elements, soon prove to be the artist’s active tools, which are capable of achieving the essential purpose of the set-up: the formation of “landscapes” that become the viewer’s stroll to his own desire, secret and memory that is only his. In these “landscapes” filled with narratives and relations, he may feel as if the poet’s words are resonating in them, that love should not be a loss of self but a coexistence of two solitudes. And since the Secret Desires refer to sexuality to a great extent too, it can also seem to him that this place of various sexual inclinations is here for one to identify oneself with it, or expand and add one’s own desires to it.

The Secret Desires were created specifically for the spaces of the Račka Gallery in close cooperation and dialogue with people from a variety of backgrounds. They may also be seen as a unique study of the intricate layers of the intimate. The artist uses these to continue with her usual exploration of cultural patterns. The Secret Desires are therefore a space of contemplation of relations and desire, and at the same time a space of consideration of the wider cultural context and its reflection within the field of the intimate.

Keiko Miyazaki (1978, Ehime, Japan) studied at Northumbria University in England (2003), after which she moved to Slovenia, where she continued her studies at the Academy of Fine Arts in Ljubljana (2004) and at the Academy of Fine Arts in Krakow (2005). Today she lives and works in Prebold near Celje. Her work is based on the observation of social structures, an important segment of her creative process being communication that involves forging connection and cooperation with individuals from the immediate and wider environment. She is the recipient of the Sakaide Art Grand Prix (1999, 2002), the Cosmos Cable TV Award (2005) and the Shikokuchuou City Award for Cultural Contribution. She has been exhibiting since 1998, her most recent solo exhibition was Woman at the Insula Gallery in Izola (2017) and the group show Ksihti at the Art Factory in Majšperk (2017).