KLEMEN ZUPANC
The Four Seasons, the Fireman, the Doctor and the Man with the Silver Mercedes-Benz
5. 2.—15. 3., Likovni salon Gallery 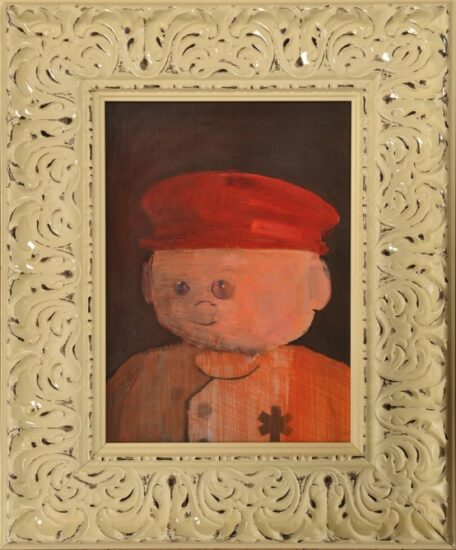 Klemen Zupanc is a representative of the youngest generation of artists. He works in painting and printmaking. His work in the expanded field of painting is characteristic for his practice, in which he seeks the models for his paintings in the digital space or uses ready-made consumer objects. He transfers found images into paintings, magnifying, transforming and multiplying them. He arranges canvases into compositional wholes. The image composed from several parts therefore gains a three-dimensional character and functions as an installation. In terms of content, the pieces are documents of the time of sorts, since the artist successfully combines elements of popular visual culture, industrial products and virtual images within them. The images reflect the collective subjectivity that is defined by a sense of emptiness, loneliness, transience and dedication to continuous repetition of the habitual quotidian life. The Gained in Translation series highlights fragments from consumer life. It shows the dull architectural masses of shopping centres, the frozen images from television screens or the scenes of car-sales showrooms in which the western subject buys himself status objects.
In the Crash series, the artist uses the title of the film by David Cronenberg, in which we observe people who are so emotionally numb that the experience of a car accident spurs them into a state of sexual excitement. The overabundance of the material, typical for the consumer era, produces the opposite, since the quality of interpersonal relationships is being lost and it seems that escaping into a state of destruction allows one to again feel as if something has been lost or creates the possibility for a new beginning. Zupanc uses toys to depict accidents. He crushes the toy cars, shapes them to obtain the desired appearance of the devastating collision, before photographing and transferring them onto canvas.

At Likovni salon, he presents for the first time his series of paintings entitled The Four Seasons, the Fireman, the Doctor and the Man with the Silver Mercedes-Benz, which highlights two iconographic motifs, the portrait and the landscape. The artist makes use of the classical painting technique. The portraits are painted with egg tempera, framed in rich frames and fitted with brass plates. The feeling that we are entering a past time when painters at court depicted their patrons is interrupted by the figures – the portrayed belong to the middle and upper social class: a fireman, a doctor, a man with a silver Mercedes and a lady with a hat, which remind us that we are in the present time. The artist has once again delved into the mass-produced children’s toys, this time choosing Duplo brick figurines.

Although choosing a different motif, he is still dealing with the concept of time – the images show the cycle of the seasons. The viewer watches a unique calendar, in which the artist plays with fictional and realistic elements. The summer scene Surf Soap Banner contains, in addition to a painted seascape, information on the “Milo za žajfo” facebook profile. It is a real website, in this case the artwork is also the advertising space. A somewhat gloomily portrayed autumn time is entitled Spaceship. It presents a copy of a work by Ed Rusha, to which the artist adds a scene of a car accident – a motif that has become characteristic for him by now. February represents the romantic winter, reminding us of the scenes featured in calendars hanging in homes. The series concludes with the artist’s self-portrait with a hat, which represents spring. Each image separately creates a specific mood with its formal characteristics, which is consistent with the idea of the represented season. Just like in the series of portraits, here Zupanc also deals with the heritage of classical painting and successfully transmits its legacy into topical contemporaneity.

Klemen Zupanc (Celje, 1989) received the ex-tempore award in Piran in 2010. He has participated in several group exhibitions, including We Want to be Free as the Fathers Were, MGLC, Ljubljana, 2012 and Premiere, Gallery of Contemporary Art, Celje. In 2013, he presented his work in the solo show From the Conveyor Belt to a Crash/Meeting at the P74 Gallery, Ljubljana. He is currently completing his studies at the Academy of Fine Arts and Design in Ljubljana.