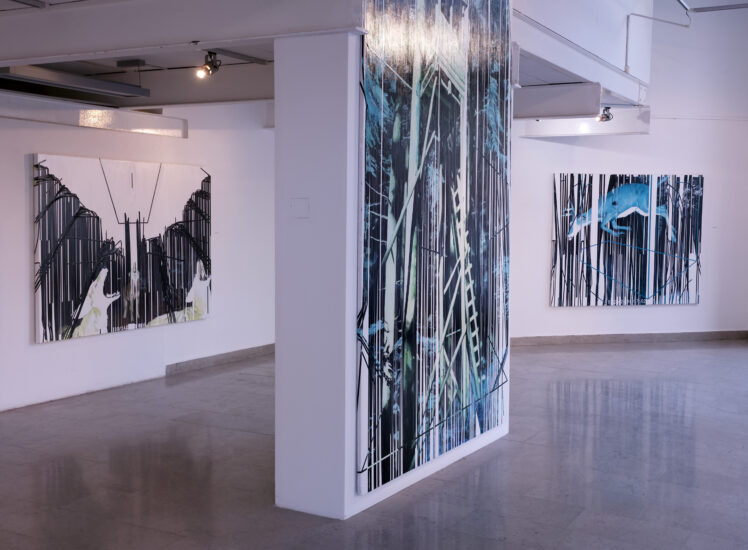 Mito Gegič (1982) completed his studies in Painting at the Academy of Fine Arts and Design in Ljubljana. He is currently completing his postgraduate studies at the same faculty.

His painting practice is recognized by the specific process of building up the painting, which is characterized by the use of adhesive tapes. The artist covers the entire canvas with duct tape, depicts an image found online on the covered support, and transfers it onto a new canvas, but not in its entirety. He cuts it into narrow strips of various lengths. He then sticks it on the base again, but leaving blank white spaces in between. By doing so, he opens up the original image and tears it into individual parts, which breaks up the density of the depicted, adding a more airy quality to the painting. He lays the strips in a systematic and random manner; the final shape is a permeable dynamic formation, which resides in a demarcated area. It is a translation from the digital environment into a tactile painting. The appearance of the artist’s works reminds of the intangible virtual space within which an incalculable amount of data is stored. Out of the infinite set of options, Gegič searches for a very specific motif online. He is interested in the phenomenon of elitist sports hunting that involves killing for fun, which significantly affects the balance of the natural environment through the killing of large numbers of animals.

The artist selects scenes of hunting observatories and hunters lying in wait, sequences of scared wild animals and their last close-up gazes, the moment of capture and the end of life. The dark, cold applications of paint, and the cut-up image, persuasively highlight the dispassionate killing. The artist’s continuous staging of the hunt can be read as an allegory to the asymmetrical social order based on the discrimination of the stronger and the weaker. It highlights the inability of exceeding boundaries; the vertically laid bands reflect power and deny any eventual entering of the horizontal, which would open up the possibility of equality. The relationship of inequality is retained, just as the processes of reckless hunting for profit are reproduced and normalized in the current times, which require immeasurable numbers of victims for their existence.

The artist presents a selection of paintings at Likovni salon Celje, which are, besides hunting motifs, also linked by the element of temporality. The models for the presented works are taken from the footage of game cameras. These are special cameras that are placed in a natural environment and serve to define the time in which a particular animal appears in a specific place. Gegič adds the exact time of the recording to the painting, thus emphasizing the documentary nature of what is displayed. The staged is the intermediate state of waiting and the tension of life and death. The emphasis on temporality raises the question of how to exploit a limited amount of time; in contemporary society, focused on incessant production, time seems like trying to grasp surplus value. Through a continuous display of hunting motifs, the artist points to the absurdity of such action.

The paintings of Gegič ontologically explore both the medium of painting in contemporaneity, as well as question human activity in a system that is set up so as to represent competitiveness, individualism and the hierarchical organisation of relationships as a fundamental form of social action. His work expresses the topical nature of the painting medium since it successfully includes social occurrences, virtual phenomena and their related new ways of seeing and understanding reality.