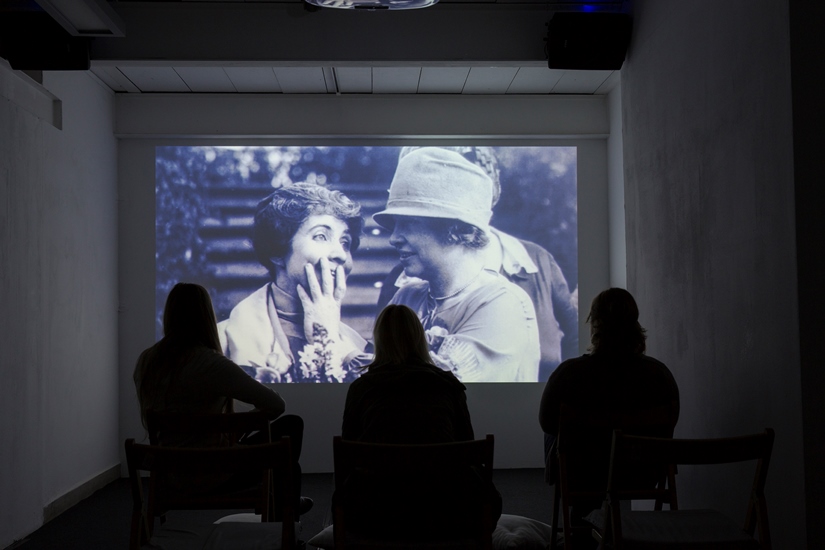 The truth lies in the middle
(Introduction to the show Word sediments, gravel and fine sand by Emilio Moreno)

In the central work of the exhibition, the film essay The I Mine, paleoanthropologists dig for human remains while miners dig for diamonds. Parallel to these scenes, the author questions memory, not only in personal terms, but also in the context of history itself, through the entries of historian John P. Roquentin (who, maybe not coincidentally, carries the surname of the protagonist in Sartre’s Nausea), who intends to write a novel about the deaf-blind auctioneer, Valerie Louise Ellis. It is hard to tell the real-life and historical facts apart from the imaginary ones in this multi-layered experience of writing and discovery of the self. The similarities between the paleontologists and the miners and these (non)biographical stories are striking, and Emilio Moreno made the film posing as a documentary only to question how identity is shaped and how history is written in the end.

Another work that leaves us thinking is the installation Jet Lag. Every ‘prehistoric’ item in this piece went through a ‘jet-lagging’ process: after making a cast of the item (the items being fossils, prehistoric artefacts and a Martian meteorite), it was grinded down to dust. The resulting dust matter was put back in the cast and in that way the item recovered its initial form. These items used to follow a timeline in natural-historical terms, and they will follow a certain timeline after the artist’s intervention. In between both timelines, there is a jet-lag. As the question for Jet Lag is, does the ‘new’ object remain the ‘old’ one, this connects it to the work Stone Acrobatics Dome, which communicates with us from the street, posing on the window of a gallery as stained glass. As a picture tells a story of a thousand words, this one is part of a bigger art project with a lot of research behind it. Stone Acrobatics Dome deals with the case of a Romanesque church, originally located in the artist’s hometown region – Spain. In the 1950s every stone of that church was carefully marked and dismantled and shipped to New York, where the very same building, was erected again, stone by stone. This was made at the request of John D. Rockefeller Jr., who had just built a museum of medieval monasteries from all over the world in Manhattan. Fascinated by this case, the fluidity of something as solid as a national heritage building, Emilio Moreno spent months in New York researching the church. He wrote, he filmed, he made sandcastles. First, his plan was to investigate the political background of this event, but during research his interest branched into many directions. As a result of that process, he produced an essay film as well as a number of related works that try to draw a parallel between language and architecture as systems that help us while depending on the basic units of construction like words and stones. Also, Moreno is interested in what happens to the value of a historical building after its dislocation from the place of its origin through the process of anastylosis.

The Order Book (Thin Air Road for Dorothy) focuses on the malleability of language and on the modes of construction of stories and history. In this book, each page contains only one word and the order of those words suggests a story. All the words are actual names of existing banks (e.g. horizon, compass, advance, river, glacier, sun, citizens, trust…).Order books are usually used by businesses to record interactions with costumers or suppliers, thus generating a sense of history. The second part of the title of this work refers to the main character of the book The Wizard of Oz, written by Frank L. Baum in 1900. The story is known for hiding an allegorical critique of the political and economic configuration of the end of the 19th century in the United States. Baum imagined a moment of radical change in the form of a tornado (elections) that would lead Dorothy (everyman) to a journey following a yellow brick road (the author claimed for the US economy to get back to the ‘gold standard’). During that journey, Dorothy joins a scarecrow (farmers), a tin-man (factory workers) and a fearful lion (politicians) heading towards the Emerald City (Washington) in order to ask the supposedly powerful wizard (the president) for a balanced future. In The Order Book (Thin Air Road for Dorothy) Emilio Moreno borrows Baum’s strategy: that of using a road trip-like narrative as an excuse to imply socio-political connotations.

The creation of different narratives, historical (collective or personal) and fictional ones, is of the greatest importance for the artwork of Emilio Moreno. What is especially interesting is the merge or clash between the material remains (e.g. fossils or cultural heritage) and the spoken or written word. The aspects of understandingvalue in general are revealed, among other things, through currency, language and history and its interpretation. This indicates the narrative potential of historical or archaeological remains, and this scientific approach is something the artist uses because of the systematic studying of material remains. In the end, one stone can be of great help in building the narrative of a part of history. Also, it is up to us to do the research and try to disentangle the web in order to figure out whether the truth lies or is perhaps in the middle of every story.