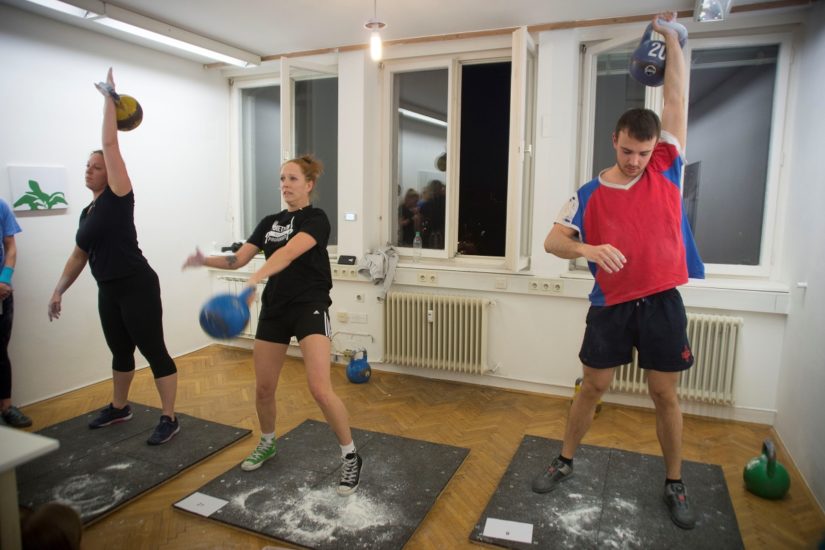 Opening of the festival and exhibition Politis of Resistance

ALEKSANDRA SAŠKA GRUDEN
The Past in Time or Another Heart

In the performance, the artist stems from the contact between past and present, between tradition and contemporaneity, creating a pattern or patchwork of different motifs. She has found these motifs in the traditions of women’s handiwork of the past and has transferred them onto the walled surface in the form of embroidery and weaving patterns. She places the present-day woman and her role in society as an antipole or into a dialogical relationship. For this purpose, she has chosen a text written by Serbian poet, performer and actress Katalin Ladikher about herself and her relationship with men. Here, she describes, in a lucid and direct way, her journey as a woman and an artist, who crossed the boundaries of what was morally acceptable at the time and was repeatedly excluded from social groups as a result. Gruden incorporates certain names of celebrities from the Slovenian milieu into the text, highlighting and rounding off the image of the performative act by repeating and writing them along the edge of the pattern on the wall.

The performance will be a solo interpretation of some the themes from the performance series Characters of Control, specifically the last version of it; Characters of Control- Soft Toy Edition. The project aims to create a vocabulary of movements and interactions around an overlapping network of characters of intimacy, desire and control. The interest in using soft toys comes from the role of the transitional object in childhood development (as defined play and reality by D. W Winncott)- its role in the development of attachments, love and desire, in relation to creativity and expression.

Cabaret Tiffany is the laboratory of the Tiffany Club, as part of which LGBTQ creators develop their stage performances. The creators’ point of departure this time were the works of painter Otto Dix, who upset the Weimar public with the “new objectivity”, as well as John Waters, the king of trash, whose aesthetics disturbed the moral values of the American middle class.

Join in the show that will take you through the aesthetic outbursts of small-town yearning!

The show includes nudity, flashing lights and perhaps an incorrect opinion here or there.

In exhausting, boring and occasionally humorous and tender one-hour-long performance, among other things, Ivana Smiljanić speaks about the link between insulin resistance and infertility, what does a summer look like without an ice cream and watermelon, how does a hormonal stimulation affect everyday life, who stigmatizes better: strangers or beloved ones, how has a barren artist conceived and how all above mentioned affects emotional, sexual, social and professional life. Smiljanić incessantly talks while walking fast at the same time, she sweats and struggles to catch a breath as time goes on.

The performance is about women’s bodies and their effort, which is visible through a kettlebell lifting competition. A look at the bodies demonstrating their strength, endurance and sophisticated lifting technique, in a humorous way, questions the positions of women and their roles in the contemporary world. The visitors to the performance will be able to vote for the winner!

When the boundaries of the anthropological are blurred and it seems that only artefact is left, a stretch mark or two may nevertheless appear from the collage. A fairy-tale creature or a creature of social expectation? From deep inside, a pulse can be heard that reaches its climax with repeating intervals. An endlessly sweet, affectionately furry, charming, seductive, hot Mary Jane exhales from the virginal sticky foam.