Primož Bizjak’s photographs range from objectively presenting things and reality, to accentuating aesthetic effects and a specific atmosphere. Such a blend is built up through the selection of subject matters, a precise exploration of the context, a unique process of making the photograph and the principle of using photography to show the invisible. He uses an analogue technique and shoots with a folding camera. His shots are generally completely unprocessed and mostly made at night. Usually with a long exposure that can last all night long, so that light, colours, shapes and details, usually not perceived by the eye, are captured into the carefully considered compositions, taken from a precisely defined, often difficult, hard-to-reach or even forbidden angle. Bizjak’s theme is most often tied to the history, architecture and landscape of the area in which he usually resides or explores in detail through numerous visits and careful observation. He is interested in borders, abandoned and historically marked spaces, spaces that have lost their original purpose or are in the process of transformation, human interventions into the environment and nature’s workings, the intertwining of the present and the past. In his photographs, we trace the border guard stations and military forts of World War I on the Italian-Slovenian border, the remains of military forts built in Venice over the last 500 years (the Difesa di Venezia series, 2005 and 2008–2009), the Balkans marked by the most recent war (the Sava, Danube and Drina series, 2014), the hidden spaces of the Venetian canals when they were without water due to renovation works (2002–2005), the premises of old Madrid buildings before renovation or removal (Madrid: Mudanzas y Reflejos, 2006–2016).

Primož Bizjak will present his latest series Alpi Apuane at the Gallery of Contemporary Art in a selection of seven large-format photographs measuring up to 3 metres wide. The motif in the photographs are the abandoned Apuan quarries, which are known particularly for their marble, which has been used to create many architectural and sculptural masterpieces from Roman times onwards. The series took almost four years to be produced, from 2014 to 2017. It speaks, not only of the famous history of quarries and stonecutters’ innovation, but also of the consequences and indelible nature of human intervention into the environment, causing pollution and the disappearance of entire mountainous regions. And especially about the transitional state, as man has abandoned his activities and nature has taken over. The tiny details, water and vegetation, indicate its power to slowly and repeatedly return to the place that man has left behind. The past and present are intertwined in the photographs, and there is a special time required for the creation and impact of the photograph. This is the exposure time at which Bizjak achieves the desired intensity of light and colour. It is precisely these two aspects that allow his compositions to attain another, different quality, a characteristic softness and an almost metaphysical silence and an unusual sense of timelessness. Bizjak manages to inscribe his photographs of monumental dimensions, which are otherwise a document of a space and time, with an atmosphere which is sublime in places, but always subtle and embraces the viewer, with so much more.

Primož Bizjak (b. 1976, Šempeter pri Nova Gorici) initially studied Economics and Logistics of Transport. In 1999, he enrolled at the Academy of Fine Arts in Venice, where he graduated in 2005 with a degree in Painting under the supervision of Professor Luigi Viola. After completing his studies in Italy, he lived in Madrid, having recently moved to Munich. He has presented his work in solo and group exhibitions at home and abroad, particularly in Spain, Slovenia, Croatia and Italy, where he participated in the 54th Venice Biennale (2011). His most recent exhibitions include Mudanzas y reflejos, Tasman Projects, Madrid (2016), Sava, Donava and Drina, Museum of Contemporary Art Metelkova, Ljubljana (2015), Alpi Apuane, CAP – Centro Arti Plastiche, Carrara (2018) and Alpi Apuane, Gregor Podnar Gallery, Berlin (2018).

The exhibition is accompanied by a catalogue with an accompanying text in Slovenian and English. The text was written by Simone Menegoi and the catalogue was edited by Gaja Golija, Gregor Podnar Gallery. 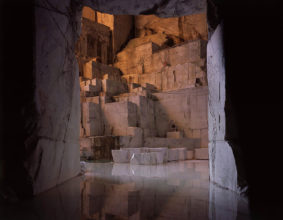