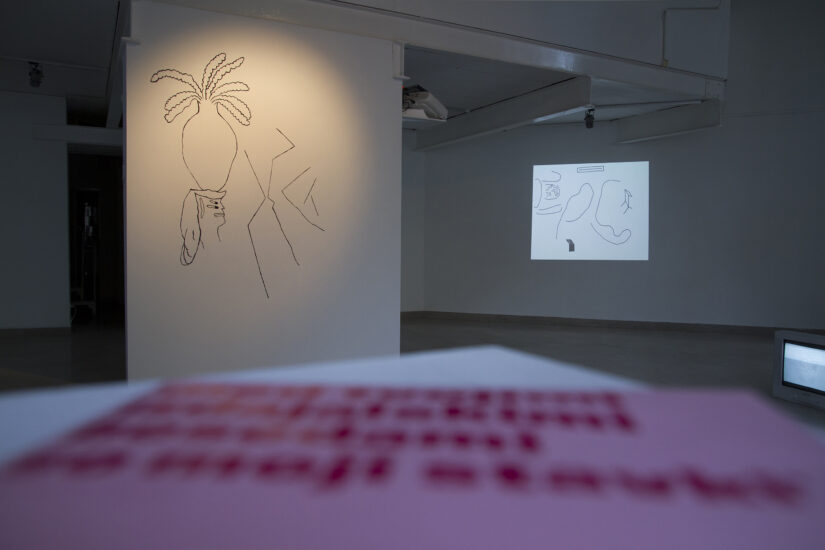 The exhibition ‘Between your perfidious words rest my sentences’ is an interweaving of poetry by Ana Makuc and drawings by Nevena Aleksovski. This is a layering of images and a harmony of voices. Many women from history, literature, mythology, speak out at the same time in the sound installation of poetry by Ana Makuc. “Lyrical women subjects are drawn from traditional positions, deprived from their sacrificial role or stereotyped mythical fatality, making them decisive, independent, thoughtful” (Vesna Lemaić). Through the use of a variety of media, the chaotic images of the self and others by Nevena Aleksovski are drawn and overlapped across the walled surfaces. The foreground features the attitude of the individual woman towards herself, as well as her relation to Others, and the relationship between the individual woman and (patriarchal) society. The authors, as in their previous project (Roland Barthes’ Lover, 2015), thus deal with the nature of the relational, exploring their positions as precarious workers, artists, migrants, women, nomads, the situation of women in the literary canon, the socio-historical situation of women, the relationship between the genders, sexuality, yet they upgrade it by deconstructing it. Many voices become a single voice and a single female subject becomes more thereof, while the images of the self are all the time multiplied, blurred, recreated. Multiplicity, schizophrenia and fluidity of female identity becomes a solid position on which we can act in the collective to battle against the structural inequalities of patriarchal capitalist neoliberalism. The personal is political, art is direct. It serves as a means of psychological if not material survival, and as a strategy of resistance.

Nevena Aleksovski is an academy trained painter with a master degree in cultural studies. She is also active as a pedagogue, working in the media of drawing, painting and video.

Ana Makuc is a literary comparativist with a doctorate in women’s and gender studies. She is also a poet and a translator.

Both are collaborators of the Red Dawns feminist and queer festival.Their two joint projects to date are the exhibition Roland Barthes’ Lover, which combined the poetry of Ana Makuc and the drawings of Nevena Aleksovski at the 16th Red Dawns Festival, and the eponymous collection of poems with drawings published by Apokalipsa in the Fraktal collection in 2015.