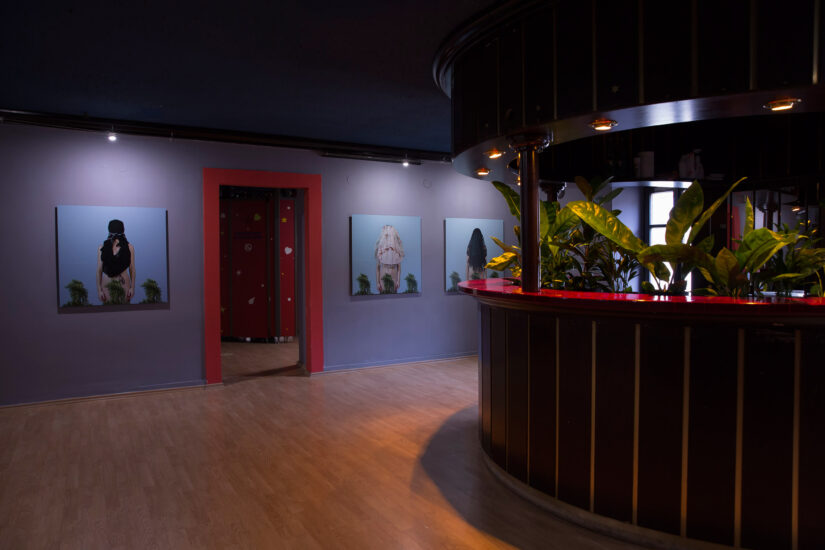 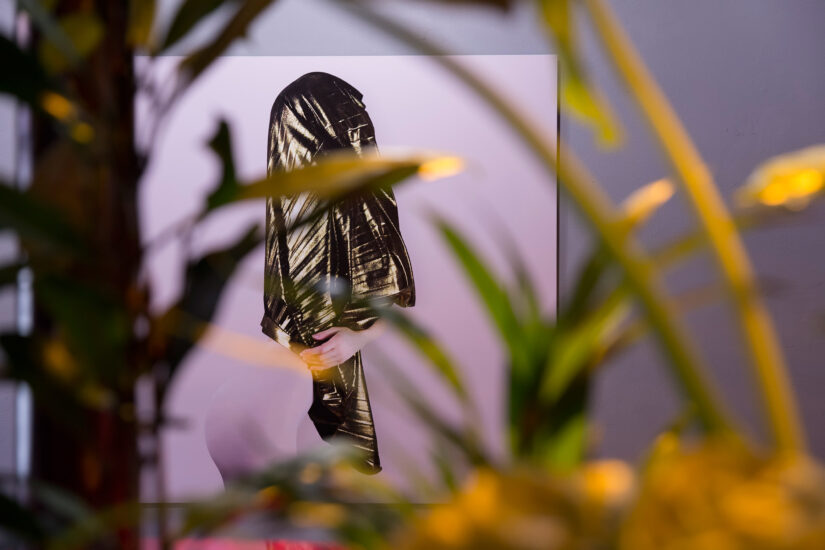 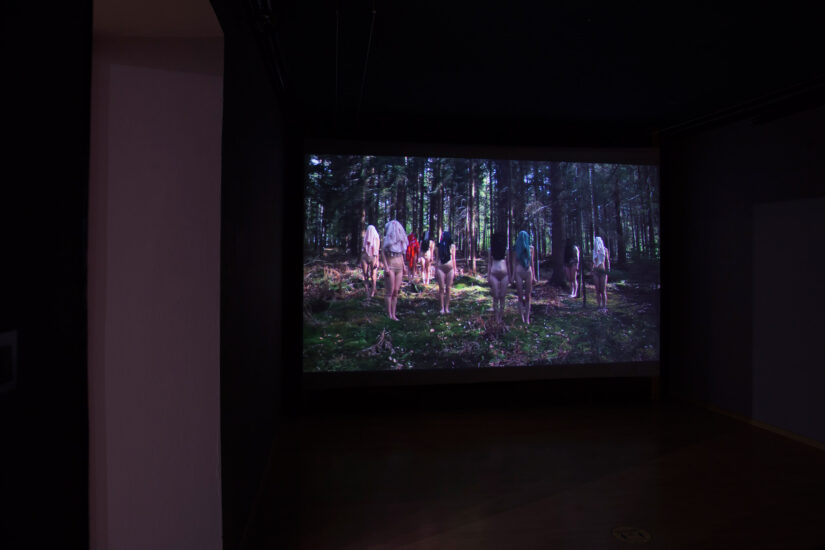 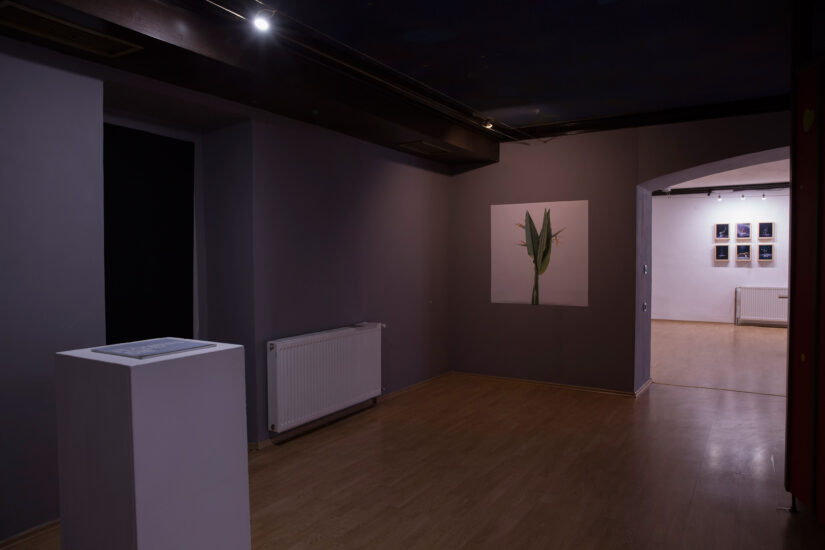 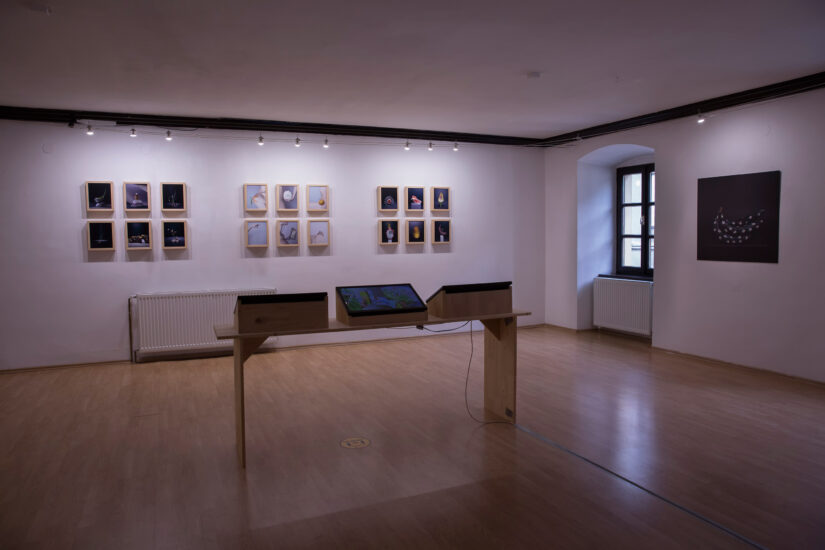 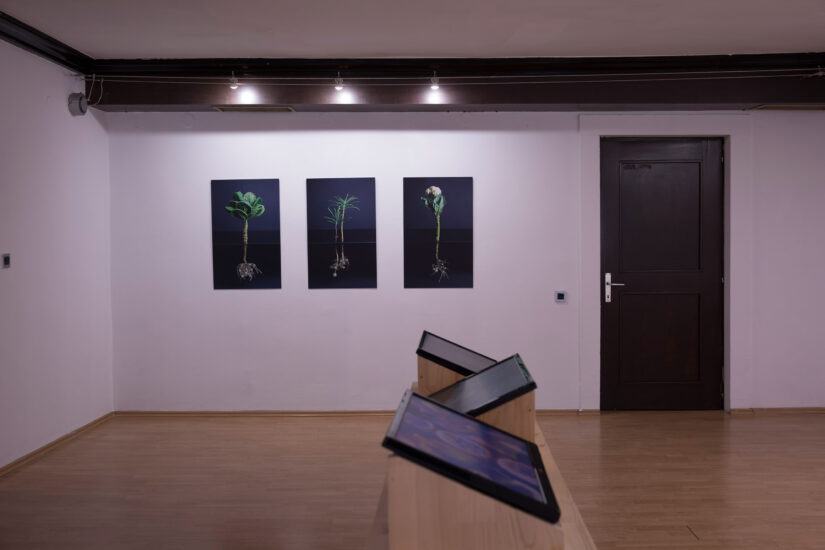 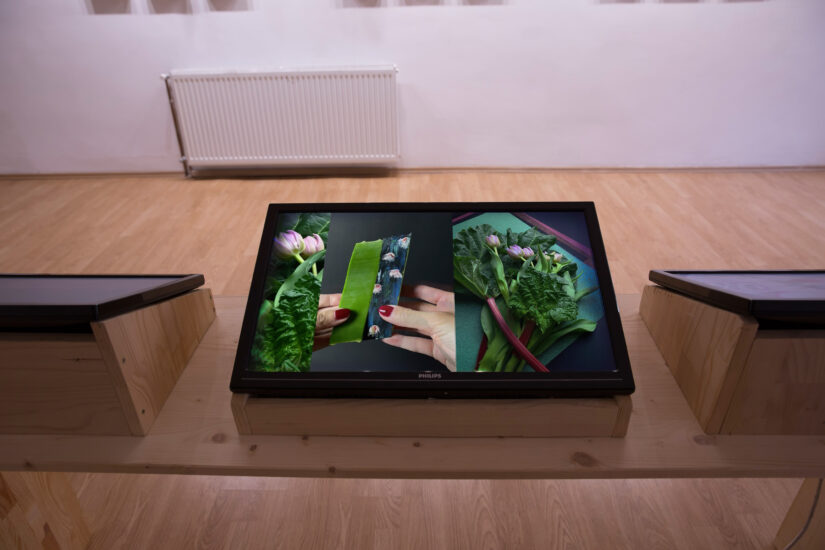 In her photographic practice, Ana Straže strikes a balance between the intimate game of capturing an image and responding to the visual phenomena of the external, media-saturated and image-overwhelmed world, which John Berger would describe as a global system of deception. The artist transforms her photographs into delightful artistic poses that carry multiple message structures. She places the photographed object or subject directly at the centre of the image, be it a still life motif or her own body, setting them out before us with aesthetic purity and thoughtful sensuality as an object of admiration or adoration. She also inserts a gaze into the photographs of the unusual states of “things”, elements of kitsch and a covertly erotic emancipated play of nature and body. The three series in the exhibition gain their expressive power when we begin to lift the curtain of formal perfection in the rhythm of the repeating motifs.

The Garden of Eden project (2012–2016) prompts a reflection on the acceptance of nudity and the position of women in various religious and social traditions. The artist dons the naked female body with fashionable skirts so that the head cannot be seen and the view is obstructed – what is exposed is usually what remains hidden. With the choice of colours and materials of the figure, the image bears an easy reverberation of popular culture, which is grounded by the social context. The photographic series is accompanied by a video that encourages reflection on the unenviable static and multifaceted position of women in society, accompanied by a sense of shame. The work suggests the perception of an audacious female corporeality that can mean, on the one hand, a standard or object of desire, and on the other, an object of contempt or a complete taboo.

These Flowers Will Never Die (2016–2017) is a project that tells the artist’s personal story about a gift, transience and memory. By continuously photographing dozens of almost withered bouquets of flowers, Ana Straže creates a herbarium of memories that she heightens with a detailed depiction of the plants’ decay on a white background, and in such a way at the same time also dissects transience through the stilled moment. Once a symbol of the giver’s affection, it becomes a decaying product of time. The series very clearly expresses photography’s potential to show nature visibly less alive. It is precisely this in-betweenness in time that creates a tension in the content when viewing the work.

In the last series of photographs Forbidden Food (2019–) the artist presents contemporary still life. Using ordinary food (mainly fruit and vegetables), she exposes precise cross-sections, layering or revealing their texture and giving the object a new aura through the manipulation of the photogenic set-up. On the one hand, the series recalls the fetishisation of food, which has been one of the most popular themes in social media for some time. Namely, influencing is based on the illusion of the presented images, it expects the adoration of followers and the consumerism of both material and symbolic content. Among other things, the series of “forbidden food” represents a very plastic and creative response to the consumerist and exhibitionist logic of popular culture. The selected, aesthetically composed frames arouse the desire for complete indulgence. The food in its appearance becomes an object of admiration and desire, but the transformation itself renders it essentially useless and inedible in real life, and perishable in the short term. A peeled grapefruit chunk, sliced aubergine or a bunch of bananas are exposed by the artist with accessories such as beads, pins and paint so they become attractive sculptures to which she attempts to give a new appearance through a play of aesthetics. The result is not only the attractiveness of the gaze but the artist’s seeming enjoyment of handling the food. With this series, the artist continues to reflect on the forbidden fruits and stereotypes of virtual paradises in society, which, among other things, challenge her to explore the boundaries of aesthetics and pleasure.

Ana Straže (1982) received her master’s degree on the theme of photography in contemporary art from the Faculty of Natural Sciences and Engineering in Ljubljana in 2013, majoring in Graphic and Interactive Communication. In 2009, she began to take part in photography competitions, receiving both local and international awards. Between 2013 and 2020, she presented her photographic projects in several group and solo exhibitions. These include her solo presentations at Plevnik Gallery – Kronkowska, Celje (2016, 2017) and Celje FOKUS Festival (2016, 2017), as well as group shows at Račka Gallery, Celje (2018, 2019), Match Gallery, Ljubljana (2017), Gallery of Contemporary Art, Celje (2016, 2019, 2020), AQ Gallery, Celje (2013, 2014) and Tribeca Factory Interiors, Prato, Italy (2020). In recent years, her photographs have been featured by international photographic, fashion, design and art magazines, as well as digital platforms: PhotoVogue (Italy), Uncoated Editions (Berlin, Germany), F-Stop Magazine (Chicago, USA), The Artling (Singapore & Shanghai, China), Plain Magazine (Barcelona, Spain), Colossal (Chicago, USA). This month she received the Sienna International Photo Award (“Runner Up” of the Creative Photo Awards 2021) for her work from the series Forbidden Food. Her work from the Garden of Eden series is included in the permanent collection of the Center for Contemporary Arts. She lives and works in Celje.