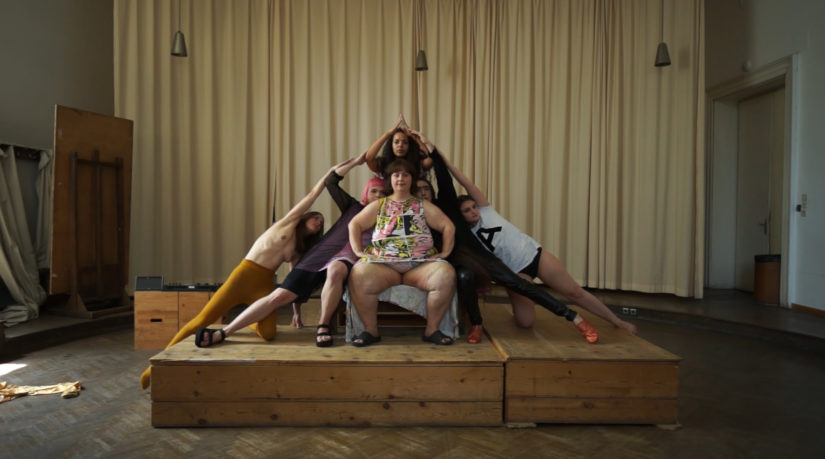 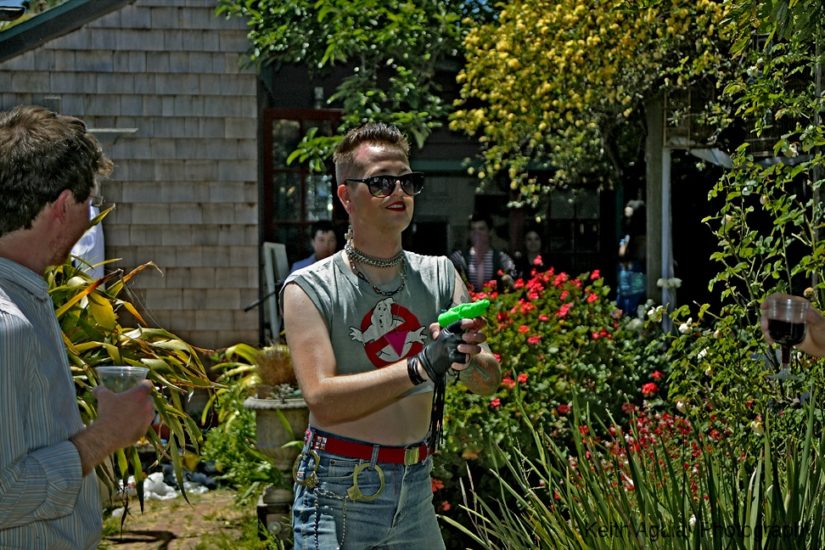 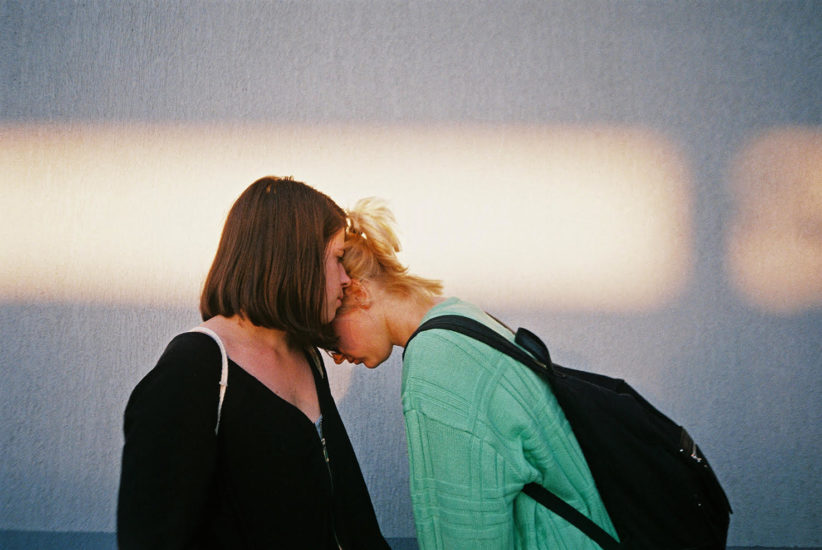 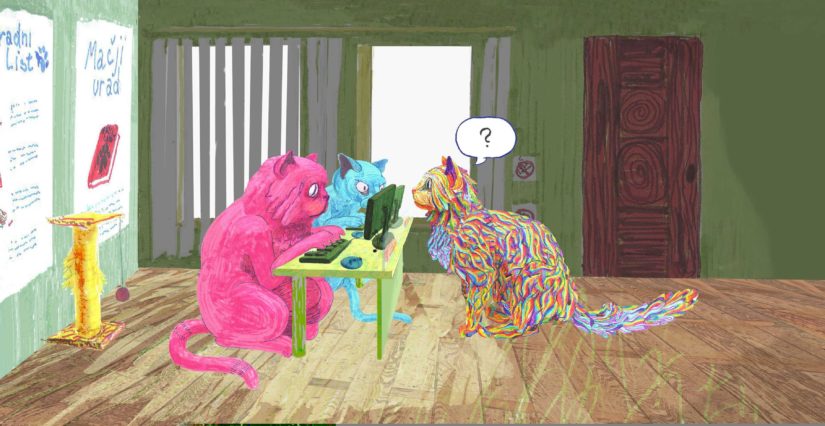 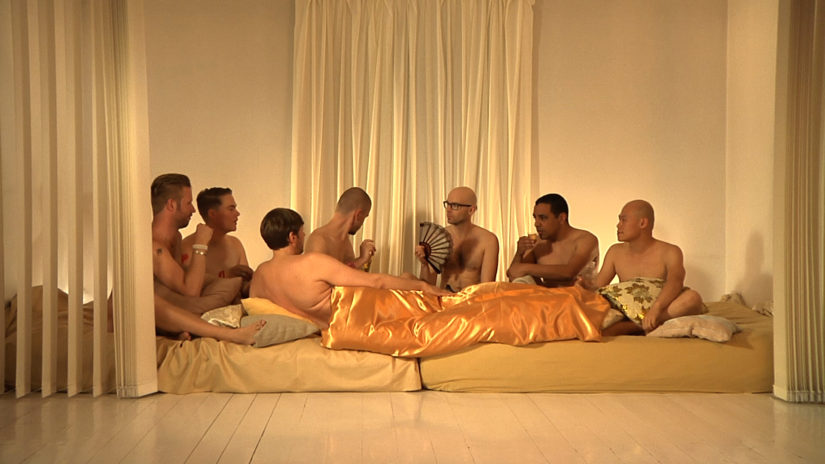 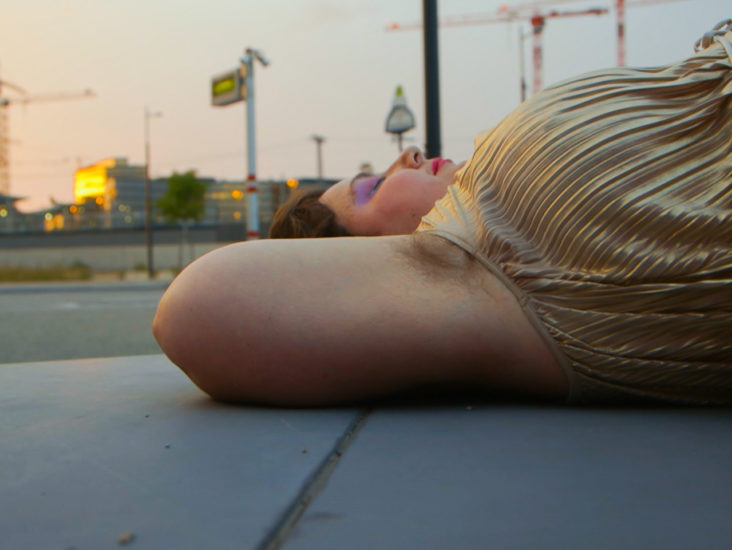 The Center for Contemporary Arts presents the second edition of the Ducking Festival, this time focusing on a critique of the normative understanding of sexual and gender identity, body image and regulation of intimate relationships. The exhibition and the series of performances bring the plurality of identities, expressions of gender, physical appearances and ways of being to the fore. The relation to the body, above all the question of what importance society attaches to external appearance and how it influences the perception and construction of its own image, is at the heart of the interest of the exhibited works. The works challenge, in a playful and humorous way, the patriarchal beliefs and capitalist demands about what a body worthy of attention and enjoyment should look like. They offer ways to reflect on the social mechanisms of designating and controlling the body. They explore the manner in which social norms regulate and limit sexual practices, as well as how their approaches seek to influence the formation of lifestyles. From a queer perspective, they deconstruct the hetero-normative idea of gender identity that highlights the binary division of gender roles and the stereotypical notion of masculinity and femininity, as well as their modes of coexistence. They emphasise the importance of gender as a socio-cultural construct, reveal methods of structural repression and forms of exclusion, as well as express the potential for resisting any normalisation and categorisation.

Nevena Aleksovski speaks of the body as a place of pleasure and pain in her new series of drawings Slippery Slope, which highlights the fragility and changeability of identity, but at the same time its entrapment in social prejudice. In their performance Mary Jane, Tatiana Kocmur and Liza Šimenc address the issue of the representation of the female body in the media, notably the glorification of the hyper-sexualised body type. By imitating forced ideals through the use of over-identification and kitsch, they stage a body of absurdity and transformation. Ivana Smiljanić points to the stigmatisation of women facing the problem of infertility in her performance Daily routine: At least six kilometres in an hour. It comes from personal experience of going through the process of in vitro fertilisation and the impact of the treatment on the body. Capitalism needs a productive and healthy body that aids growth in profits by being constantly active and taking care of itself. Within this discourse, there is no place for a bigger body – a body laden with fat is perceived as lazy, undisciplined and unworthy to be looked at. In the RIOT NOT DIET piece, artist Julia Fuhr Mann points to the intolerance to different body shapes. The film shows a group of bigger women enjoying their bodies instead of scorning and trying to fix them. They speak of a utopian social system without normativity, with an emphasis on accepting difference, mutual respect and personal freedom. Many of the bodies in the drawings of Olja Grubić are free from social prejudice, floating around in a meaningless space and enjoying their naked physicality. Neža Knez creates a weightlifting competition for women in her performance Body on a Pedestal. The work breaks down predetermined assumptions about the concept of femininity and expresses opposition to the disproportionate distribution of power on the basis of gender. In the performance Soft Lies, Deniz Űnal explores how the need for domination and control enters the field of intimacy and desire. It focuses on the period of early childhood development, especially on the importance of playing with plush toys, as an initial form of developing emotional attachment. Tina Kolenik addresses gender relations within the field of politics. She puts on a current political figure in her newly staged diptych that takes on the form of a selfie. The piece looks at the viewer in a playful way and shifts current political developments into the context of irony. Gender issues and the current inability to regulate multiple gender identities are addressed in the video Rebellious Essence by Ana Čigon. It takes place at the cat office of the Ministry of the Interior, where the cat protagonist makes an application for a passport. The process is delayed because the applicant does not identify with the binary division of gender roles and is therefore systematically marginalised. In the performance All Eyes on Us, artist Julischka Stengele problematises the representation of marginal bodies and emphasises the importance of occupying space as a practice of freedom. A group of performers utters forms of labelling that discriminate against a subject based on race, gender and class. By directly demonstrating the process of categorisation, it achieves the effect of empowerment, since it turns the gaze on the signifier. Besides revealing the stereotypical gaze, it also discloses those traits that are hidden behind the artificial phantasm. This kind of taking up space and the right to define one’s own body and forms of living is highlighted in the video piece The Rosa Song by artist Benny Nemerofsky Ramsay. It is a reinterpretation of the last scene of the cult film It Is Not the Homosexual Who Is Perverse, But the Society in Which He Lives (1971) by director Rosa von Praunheim. A group of men discuss new opportunities for gay life, forms of community and relationships, based not only on sex and pleasure but on alliance, friendship and social responsibility. Cabaret Tiffany‘s Divine Desire performance questions contemporary bourgeois morality. It refers to the insightful and socially critical work of painter Otto Dix and artist John Waters, who often provoked the moral values of the American middle class through his work. Aleksandra Saška Gruden thinks about the position of women in society through the bond of past and future in the performance The Past in Time or Another Heart. She has chosen the text of poet, performer and actress Katalin Ladik as her starting point. She describes her life path and relationship with men and the fact that she was often excluded from social groups as she supposedly waivered on the edge of what was considered morally acceptable behaviour. The performance addresses the influence of traditional customs and patriarchal patterns on the perception of the woman’s body through a feminist perspective and emphasises the importance of decisive action. In their piece Homotopia, Chris E. Vargas and Eric Stanley consider the possibilities of transcending normativity and the frameworks of tradition through radical queer activism. The film deals with the issue of homonormativity in a humorous and playful manner through the amorous adventure of the main character Yoshi. He expresses his doubts on same-sex marriage and supports a revolution that will be based on love outside the institution, transcending racial, gender and class discrimination. Asiana Jurci Avci shows that friendship is often the form of mutual bonding that most characterises an individual. In Tendertits, she documents the most intimate experiences of three female friends through her photographic lens. The moments of shared experience, good and bad, tied into unconditional solidarity. 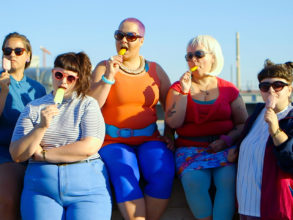