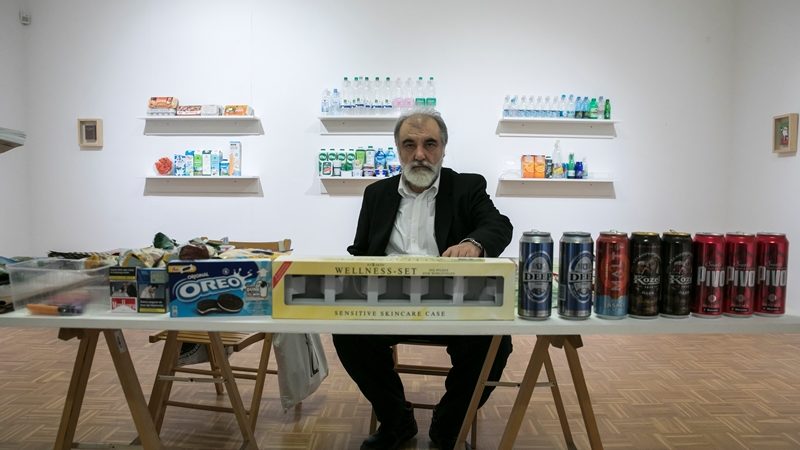 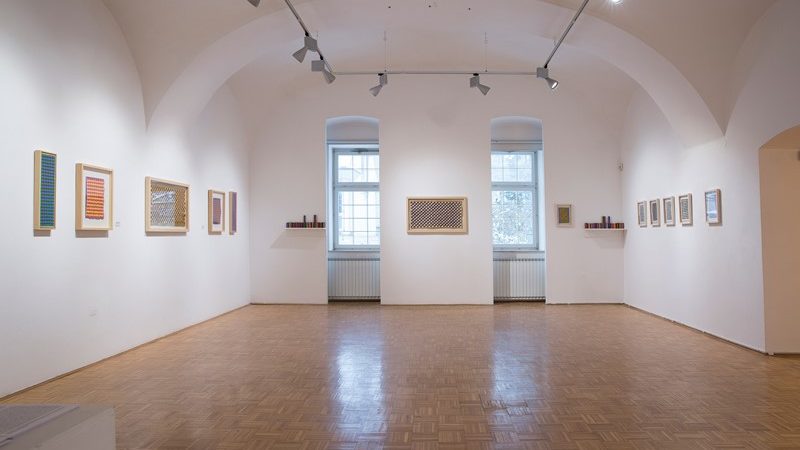 Jusuf Hadžifejzović – one of the most renowned Bosnian-Herzegovinian artists and one of the most provocative artists of the middle generation from the Balkans – has put on show his new artistic oeuvre, which he created on his residency in Celje. He has continuously maintained his practice of pursuing, collecting and selling emptiness, extending and expanding it thoughtfully into a new space. The fact that he created nearly all of his works during the residence, brought them here to finish, or combined them with the products that had recently accompanied him on his way, is no coincidence. This is part of the art concept that merges with the artist’s life practice. These are observation and fascination over seemingly identical phenomena, formally set objects with the same shell, but a different possibility of content and mutual relations. Through association with the post-avant-garde artistic, performative and conceptual practices, the concept indicates a way of living and creating that is inseparable.

At the exhibition, we enter the shop of emptiness and the shop of emptinesses. Present everywhere is the nothing that pervades the essence of the idea itself, the image of the image, and at the same time the constantly re-awoken discourse on contemporary art, which frequently becomes his trademark: What is actually the work of art here? Is that the set form? Is that the idea, the exhibition as a whole, the artist himself, his “signature” or the separate sum of the related elements that form the message?

With a kind of Beuys-like legacy from the Düsseldorf school, Hadžifejzović set off on a long artistic journey and is walking along those margins that consider art through a new life of seemingly dead objects or already known historical concepts. Persistently, with an almost incomprehensible verve, the artist collects either art objects or objects from everyday life, searches for new value systems in them, and bestows the status of a work of art upon them. As ready-mades and assemblages, he transforms them into art and gallery presentations, which the artist calls “depotgraphy”1. The term in the artist’s case means writing with objects liberated from depots, either someone else’s or his own. From the plethora of objects of various functions taken from different contexts of life, the artist has shrunk his collecting over a good decade to packaging, which he began to accumulate when he first returned to Sarajevo from Antwerp after the war in 2002. This is when he noticed how consumer products, their shape, their names, and their power are changing. The way in which emptiness gapes out of them. Collecting things and packaging of a certain time and environment transformed into collecting of consumed things that had once served the artist. With his gallery placements, he exposes everyday objects with indirect reference to the ideas of the most famous works of the 20th century art – from the cans of Piero Manzoni to Warhol’s Campbell soups and still-life images of Giorgio Morandi, even the “items” of the conceptual OHO group. But with a different purpose. If the OHO group is all about a Reistic elevation of the “thing” itself outside the artist’s privileged tendency, then what is at stake in the case of Hadžifejzović is the artist’s personal and intellectual property, a consideration of things that used to be serialised before they became personal, then worthless, and then again filled with artistic form and as far as museum diction. The “depotgraphically” arranged items, artworks and art objects, therefore, create a museum of interpreted emptinesses. The packages are arranged like in a shop, they are for sale – at the original price of the former product or at the price determined by the artist. In the paintings from cardboard packaging used for batches of foodstuffs, the imprints on the packaging that took place during transportation from manufacturer to consumer, have been marked and coloured. The little holes are the elements here and there that are determined by a rhythm of hand-coloured dots, which are implicitly reminiscent of Damian Hirst’s paintings, except that the artist’s contemplation of painting takes place on recycled material, and the works come close to analytical painting in their various rhythms and colour schemes. According to the same artistic principle, objects that preserve their original form are addressed besides the paintings. Plaster casts of plastic bottles, boxes and tetra packs are the negative, frozen forms of packaging, archaeological documentation of the content of the nothingness of its shell, which has been condemned to transience and has now been transformed into museum eternity. The artist’s series appear as the series of his recent personal chronicles on the one hand, and remind us of a historical overview of the artistic, conceptual and other visual practices within contemporary art, on the other. Further on from Hadžifejzović’s performative auctions with signed packaging, the artist’s art depot-bio-graphy is on sale at the Celje exhibition, which constructs new meanings to “words” (objects or phenomena) following the language system, and writes memories of the personal contemplation of emptiness.

Jusuf Hadžifejzović was born in 1956 in Prijepolje, Yugoslavia. He studied at the Belgrade Academy of Fine Arts in the class of Professor Stojan Čelić and completed his postgraduate studies at the Kunstakademie Düsseldorf under the supervision of Professor Klaus Rinke. His art practice includes painting, performance, installation and “depotgraphy”. He has exhibited in many international exhibitions, from Berlin to South Korea, and has presented himself at the Venice Biennale four times. In 1984, Hadžifejzović, with the help of R. Tadić and S. Bukvić, conceived the Yugoslav Documents, a biennial exhibition of Yugoslav contemporary art in Sarajevo (1987, 1989), and in the 1980s, he was among those most merited for the rise and promotion of the Sarajevo art community and the Yugoslav scene in general, also within the international arena. He lives and works in Antwerp and Sarajevo, where he leads the Charlama Depo Gallery.