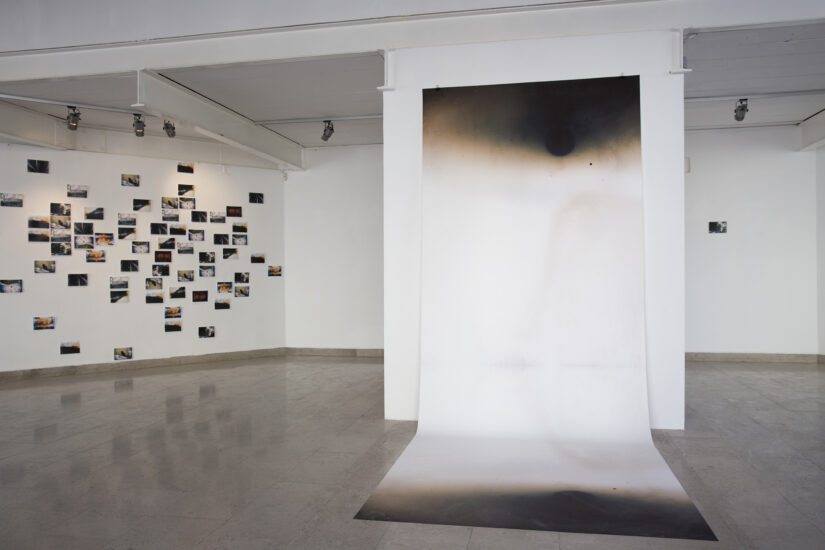 Robert Hutinski uses photography to think about and interpret the crises of the contemporary times. In order to sharpen and articulate his own view on social events, he often turns to archival documents, where he seeks visual images that testify to the continuous presence of violence within society. In doing so, he highlights violence as a constitutive element of every political formation and explores how various ideologies in their radicalism occur within everyday life, from religious delineations (Legacy, 2010–2016) to controversial scientific experiments (The Structures of the Divine Corridor, 2013–2015) and war crimes (Home – Children’s Story, 2013–2015). What is essential for his work is that while researching the archives, he uncovers the shocking stories of the destinies of people, the victims of degraded ideologies (Za-bris – (behind the) Effacement, 2014–2015). Their silhouettes and portraits often appear in photographs, since the actualization of collective memory of past traumatic events is a key aspect for the artist. He merges archival material with his own interventions and demonstrates his understanding of photography as a space of simultaneous encounters through the processes of layering image onto image.
Simultaneityis also the title of the series, which he presents at Likovni salon. This time there are no figures or documents to bear witness to the cracks of time. Instead, he uses landscape to talk about crisis as the final condition. In the exhibition we see shots of landscapes, whose shooting location is difficult to ascertain, they are more excerpts of a desolate landscape, hints of certain moods or sentiments of a time.
A suffocating anxiety prevails within the fragmented images, which stretches and grows between the individual elements like a dark mass. Or, just the opposite, settles into the form of the shining whiteness, giving rise to a feeling of unease because of its apparent boundlessness. The elements in the photographs are barely visible given the expansive background, only upon careful observation can their motifs be discerned. These are often isolated, faraway and hazy trees, sometimes brought to such proximity so as to appear somewhat abstract. We see close transparent shots of flowers, their aesthetic is reminiscent of x-rays and generates a sense of alienation in the viewer. Alienation and an anticipated presence of horror prevail in the Simultaneousness series and transpose the viewer, who initially expects scenes of beautiful landscapes, into a zone of discomfort. By demarcating the space and recreating the dynamics of dark and light, the installation in Likovni salon presents the viewer with the artist’s reflection and sentiment of the desperate situation into which we are trapped, as well as the simultaneousness of the progression of the future, which is taking place concurrently to our gazes.

Robert Hutinski (1969) lives and works in Celje. He has presented his work in solo (The City under the Boot, Museum of Recent History Celje, 2015, Ecce Homo, AXx Gallery, 2015, Celje Portraits, Museum of Recent History Celje, 2009 …) and group exhibitions (Art matters, but art is not enough, Center for Contemporary Arts Celje, 2016, Timeless Ophelia, Small Gallery, Cankarjev dom, 2016, Infinity, Arezzo & Photography – International Biennale of Photographic Art, 2016 …). His work is included in numerous specialized magazines (1000 Words Photography Magazine, GUP Magazine, Eyemazing …) and books (Mono Vol. 2, Gomma Books, 2015, Atavism, AKINA Books, 2013 …). He has received many accolades for his work. He is represented by EYEMAZING Editions. He has also been running the AQ Gallery in Celje since 2013.