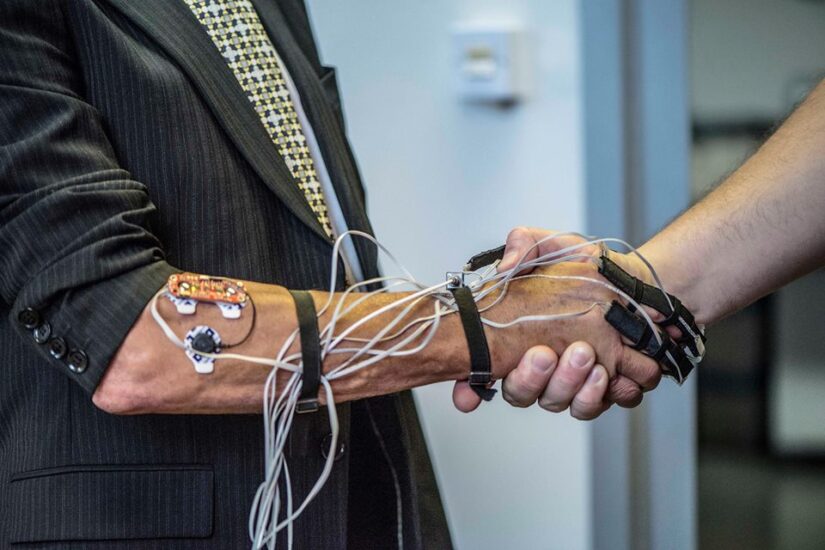 Intermedia artist Sanela Jahić is presenting a selection of recent projects at Likovni salon. These address issues of labour in conjunction with technological advances, they deal with the subjectivity of the worker and the manager, and explore forms of ownership opposed to the capitalist division of labour.

Her art practice is based on investigating the phenomena that touch upon the changes tied to the capitalist order of production, particularly with the growing robotics industry, and the effect it has on the structure of labour and the participation of the worker. She studies the attempts at optimizing the work process, such as for instance the analyses of behaviours and their potential adaptations intent on speeding up production and increasing efficiency. Often such attempts see the relationship between man and machine as the identification of man with machine. This aspect has been particularly highlighted by the artist in her work Tempo Tempo (2014). She has researched the studies of the speed of movement performed in the second half of the 19th century by scientist Frank Bunker Gilbreth in order to find the most efficient movements performed by workers during particular tasks to achieve optimum efficiency, resulting in increased productivity.

Likovni salon will be host to an exhibition of her continued explorations. Typical for her art work is the creation of experiments, integration with other disciplines, and collaboration with various social groups. Works on display include the installation Deregulated Vision (2013), consisting of an old pair of glasses and kaleidoscopic lenses, which presents the obsession with the multiplication of value as a dominant commandment of late capitalism. That the system is immune to criticism and seeks to depoliticise all that is social, is indicated in the piece Friction Machine (2013), where she has interleaved the pages of two key books – both of which present a critical analysis of the political economy – into a joint formation. By transferring the force of four workers, which she measured in an experiment conceived specifically for the project, she bound the books into the object which functions as a pulling device and replicates the strength of the workers in attempting to unbind the two books. In her piece Five Handshakes (2016) she addresses shaking hands as the fundamental gesture in doing business. She invited various managers to participate in the experiment. She placed sensors on their hands and measured the strength of their handshake and muscle contraction while shaking hands. The exhibition presents a graphic analysis of the measured data. The project speaks of the invisible, affective impulses that influence the building of trust, while at the same time establishing a balance of power in subtle ways.

The video Mine, Yours, Ours (2016) presents those practices that consider ownership outside the capitalist frameworks of function. The piece speaks of co-ownership and focuses on two cases of worker buyouts, the Gorenjski glas newspaper from Kranj and the Domel company from Železniki. Featured are interviews with employees, who present the selling-off process and highlight the advantages of co-ownership, as well as the impact on the ways in which the company is perceived.

Sanela Jahić(1980) graduated in the Department of Painting at the Academy of Fine Arts and Design in Ljubljana and gained her master’s degree at the Bauhaus University in Weimar. She has shown her work in many solo and group exhibitions at home and abroad. She received the Jakopič Recognition Award in 2016, A Look 7 Biennial award in 2014, the Pixxelpoint Award in 2011, and was nominated for the OHO Group Award in 2014. She lives and works in Škofja Loka.