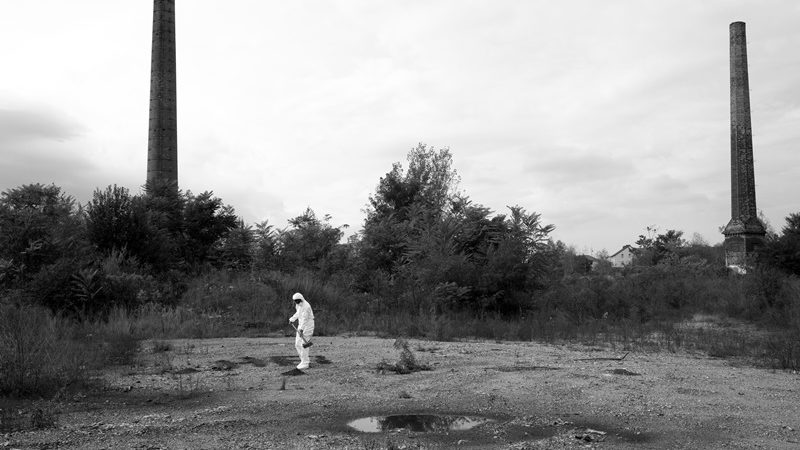 “A key understanding of the new (geological) epoch of the Anthropocene is that the natural environment of the Earth can no longer be perceived as a system independent of people operating according to its autonomous internal logic. We must understand the Earth as the “space ship” of humanity on which we live, and we must actively take care of it, so that it will continue to serve us,” says physicist and philosopher Sašo Dolenc.

This is the kind of logic grasped in the practice of Portuguese artist Maria Lucia Cruz Correia, who began to explore the burning local environmental issues as part of her residency in Celje. Based on the idea of the interactive project Urban Action Clinic, which she carried out in Ghent in 2015, she embarked upon researching soil contamination in Celje. Knowledge of the scientific, political, legal and social complexity of the problem directed her towards finding possible solutions, arising from various positions, and above all, towards proposals made from the position of the layman in cooperation with the experts. She was interested in constructing active forms of raising awareness about the occurrence of industrial pollution and promoting the responsible behaviour of the local community in the event of environmental change. Even though the artist is interested in taking an activist stance, she did not insist on protesting in the Celje case, merely using scientific methods or simply illustrations of the topic. In the “case” of a small city with a large and complex problem, she has used the art field to set up an open platform for dialogue and reflection on the role and responsibility of society towards nature. Correia has summarized several aspects in the project and has tried to show them in the exhibition as elements, important for understanding the environmental situation, also within the broader politics of the relationships of social reality.

The pollution from one of Slovenia’s largest industrial plants has left a strong mark, which remains rooted as the heritage of the city of Celje. The artist began her manifestation with a performance among the large chimneys under monument protection at the site of the old factory, which represents the focal point of the problem. Soil contamination with zinc, cadmium and lead as a result of industry and other similar effects in Celje is repeatedly dealt with by both local authorities and experts, as well as civil initiatives and artists. By mapping the artist’s interaction with individual protagonists during her residency, Correia has created a map of a network of relationships and has tried to distance herself from any biased conclusions in her own interpretation. The artist continued her activity by involving interested individuals, also launching a new initiative for a better life in the city through her Dragon Dreaming workshop in the form of the informal group Prst (Soil/Finger). As the first outcome of its meeting, the group conducted a survey on the satisfaction of the environmental situation among the people of Celje. The statistical visualization of the surveys represents the overlooked position of the inhabitants, who are often either under-informed about the state of the environment or passive in their understanding of it. The resounding headlines of daily newspapers and the dossier of newspaper articles that have resonated in public represent the role of the media, which often remain the only or the last messengers of the truth, wished-for change, or environmental alarms.

Only the core of The Soil You Want research revolves around the competition in the level of soil contamination in the vegetable patches of the people of Celje. Correia, who has already developed an urban laboratory to determine the level of contamination of the soil and plants with elements dangerous to health in Ghent, wanted to actively involve the natural science sphere precisely with the presentation of an actual analysis and provide the inhabitants with expert treatment of the soil in their gardens. Due to legal and financial constraints, the artist was not able to carry out biomonitoring despite her great wish, which would show the actual effects on people’s health through the analysis of human blood and tissue. She stayed with the soil analysis as a demonstration of a verifiable scientific method. The leaflet, in which the artist lists certain recommendations, useful links, expert initiatives and civil proposals on pollution, addresses us as a form of help for the future. The organisation of the round table with invited guests from different fields, on the other hand, again opens up a space for constructive dialogue and cooperation. The emphasis is not on repeating the already established facts, but on finding solutions, new challenges, arising either from utopian wishes or scientifically supported hypotheses, new technologies and forms of socializing. The activation of every individual who has the right to speak in the name of nature as an inhabitant of this planet is the guiding principle of the debating workshop in which – besides the testing of new forms of dialogue and community practice – the artist increasingly believes.

At the presentation of the project, the author again raises the question of the role of art within a social dynamic, which is active and important for everyday life. Lucia Cruz Correia crosses the boundaries of the safe shelter of symbolic impressions and ideas that would remain closed within the institutional framework as part of the work process. She moves from an artist of performative action to an activist, who stands for social change. By using non-art activities under the roof of an art institution, she attempts to change the field of understanding nature and society on the only Earth that we have and we want.

Maria Lucia Cruz Correia graduated in Graphic Design, ESAD (Escola Superior de Artes e Design), Portugal and received her MA in Advanced Performance and Scenography studies, Brussels, Belgium. She is enrolled on the Transmedia postgraduate programme in arts, media and multimedia at the LUCA School of Arts, Belgium. In her environmentally-oriented projects, there is always a potential shift to solutions through collaboration with scientists (Urban Action Clinic, Ghent, 2015), legal experts, activists (Postantropocentric Period: Evolutionary Perspective of the Future Climate Change, Conference, Bunker, 2016) and directly with the general public or the inhabitants of a local environment. Through participatory performance (Common Dreams, Mladi levi festival, 2016), she creates an opportunity for communication and psychological shifts, which tend towards change, coexistence and cooperation. Recently, the artist received the Belgian “ROEL VERNIERS PRIZE” for her new project The Voice of Nature. She lives and works in Ghent, Belgium.